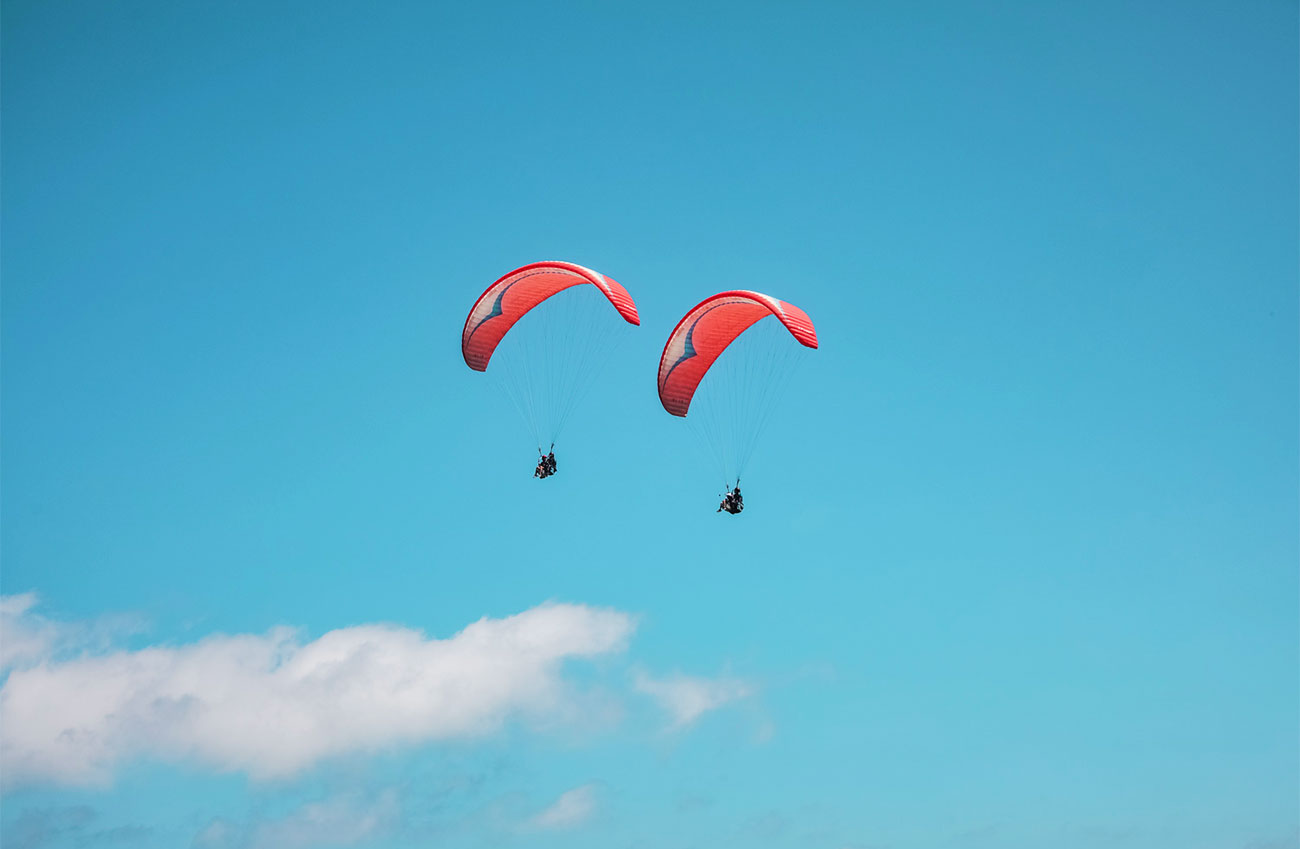 A Guide to Paragliding in Bali – Uluwatu

Asia, Bali, Indonesia, Travel Guides
what is paragliding?
Locations
Best company for paragliding
What to expect
FAQs
Other adventurous activities

Uluwatu is one of Bali’s most precious gems. Known as the home of beautiful beaches, this destination at the southern tip of the Bukit Peninsula has made its mark as Bali’s top surfing destination. Today, Uluwatu has turned into a retreat for anyone looking for serenity because of its many resorts and villas that offer a complete wellness experience.

But this beautiful island isn’t just all about relaxation! Uluwatu also offers different outdoor activities that let you bask in its natural wonders while getting your adrenaline pumped up. One of the most popular activities is, of course, paragliding in Uluwatu. If you’re an adrenaline junkie looking for an adventure, this guide to paragliding in Bali will tell you everything you need to know about this activity!

First of all, what is paragliding? 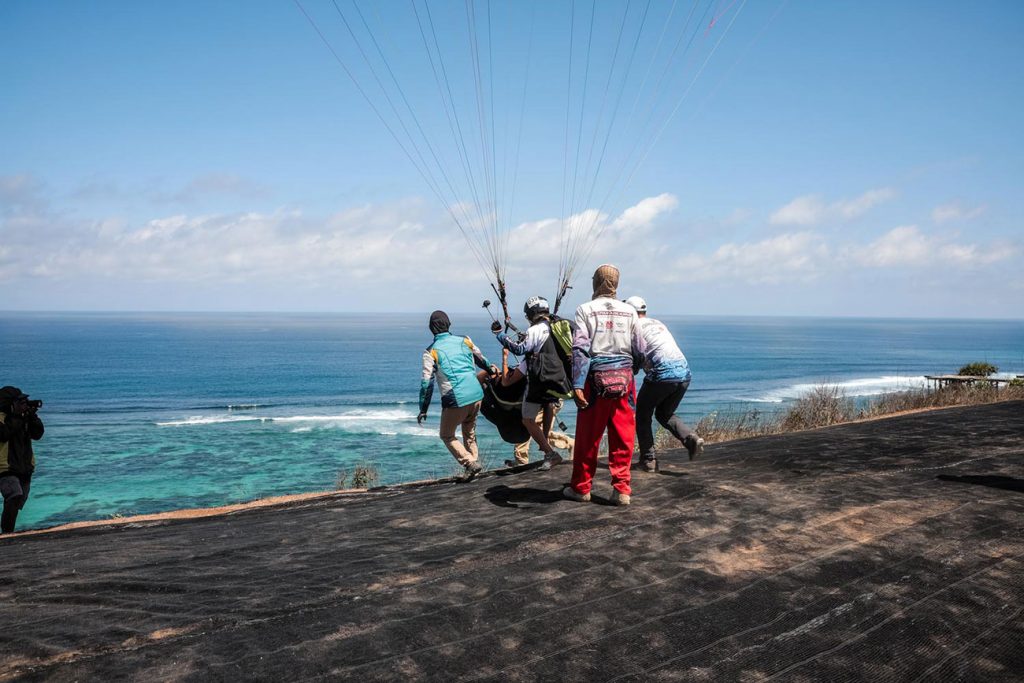 If your idea of an epic adventure involves floating through the clouds as you enjoy the scenic views of Uluwatu from about 15,000 feet above the ground, then you have to try paragliding!

This adventure sport involves parachutes, lines and harnesses that allow you to float freely in the air and manoeuvre your way through the skies using lines and brakes and by shifting your weight as you drive.

Uluwatu is the perfect place for paragliding because it’s located along the cliffside and paragliders usually jump off a mountain or cliff in order to catch air currents that give them a lift.

Although you’re not required to get a certificate or license to paraglide, it takes time and practice to really learn the ropes of this adventure sport. So if you’re trying paragliding in Uluwatu for the first time, you have the option to do tandem paragliding where an experienced pilot will accompany you for the ride. This means that you can just sit back, relax and enjoy the amazing views of the Pura Luhur Uluwatu Temple and the rest of the island’s natural wonders.

RELATED READ: 10 Best Things To Do in Uluwatu, Bali – A Complete Guide

Where can you go paragliding in Uluwatu? 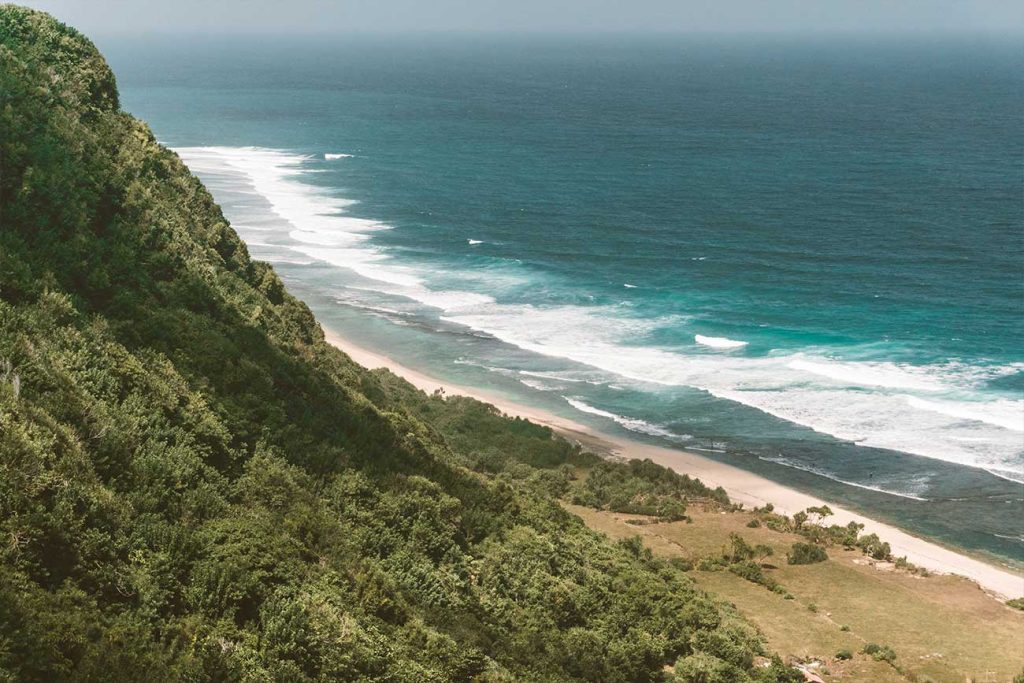 Most paragliding flights start from Nyang Nyang Cliff at Nyang Nyang Beach, which was our departure spot as well. This is the best spot on the island for this activity.

What is the best company for paragliding in Uluwatu? 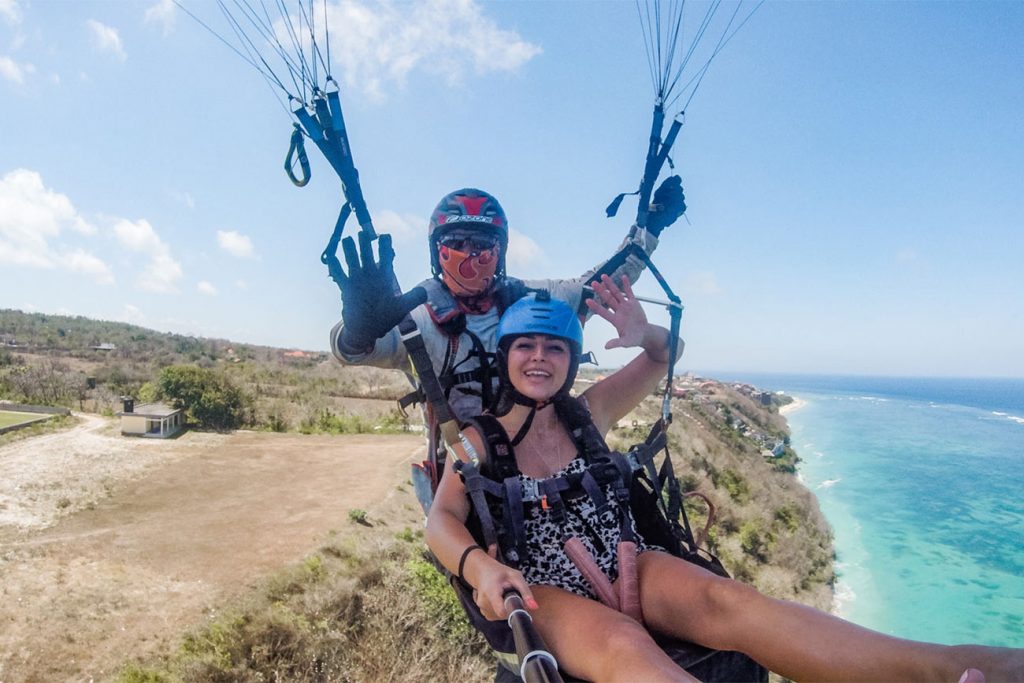 Since we wanted to try paragliding when we were in Uluwatu, we researched some companies in the area that offer tandem paragliding. We ended up choosing Nyang Nyang Paragliding because it had many great reviews and the company is also the most trustworthy in terms of experience and expertise.

If their credibility isn’t enough security, Nyang Nyang is also the only paragliding company that works with one of the country’s biggest insurance providers to insure all of its guests for up to IDR 250 million through Jasa Raharja Putra’s personal insurance coverage.

Of course, we were especially thrilled that the flight zone was at Nyang Nyang beach, which means that you’ll have the best views of Uluwatu’s great temples, rugged cliffs and stunning beaches as you fly over them.

The flight lasted for 15 minutes, which was more than enough time to enjoy the views. We met our instructor at Nyang Nyang beach where we got briefed and practised some runs on the beach before we took on the real flight. The paragliding experience cost us around £25 per person, but it was worth it! 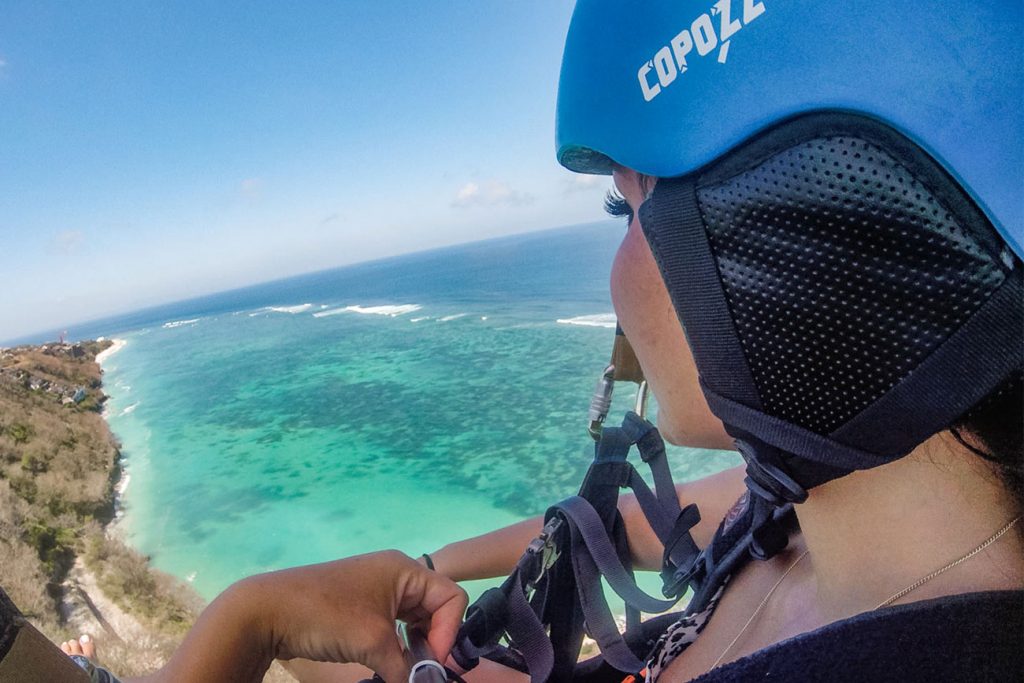 Let me briefly explain what you should expect during tandem paragliding. You’ll basically be jumping off a cliff (I know, it sounds scary!) tethered to your certified instructor or pilot (not that scary anymore!). Tandem paragliding flights usually take around 15 minutes, during which you’ll get to admire Uluwatu and its beaches, cliffs and highlights from above. In the end, your guide will be in charge of a soft landing, so no worries about this aspect either. Trust me, if you’ve never done paragliding before, you’ll be in awe!

Most paragliding tours and companies offer photo and video documentation of your entire adventure (free or for an additional cost). Of course, they also offer insurance, a bottle of water and some can include transportation to and from your hotel.

FAQ about paragliding in Uluwatu 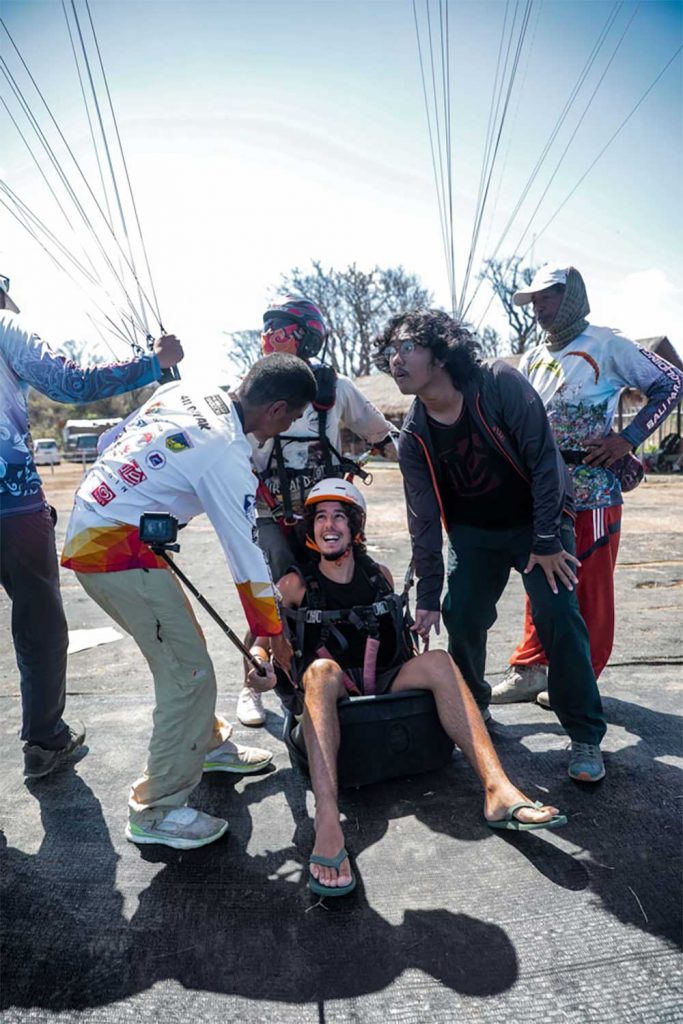 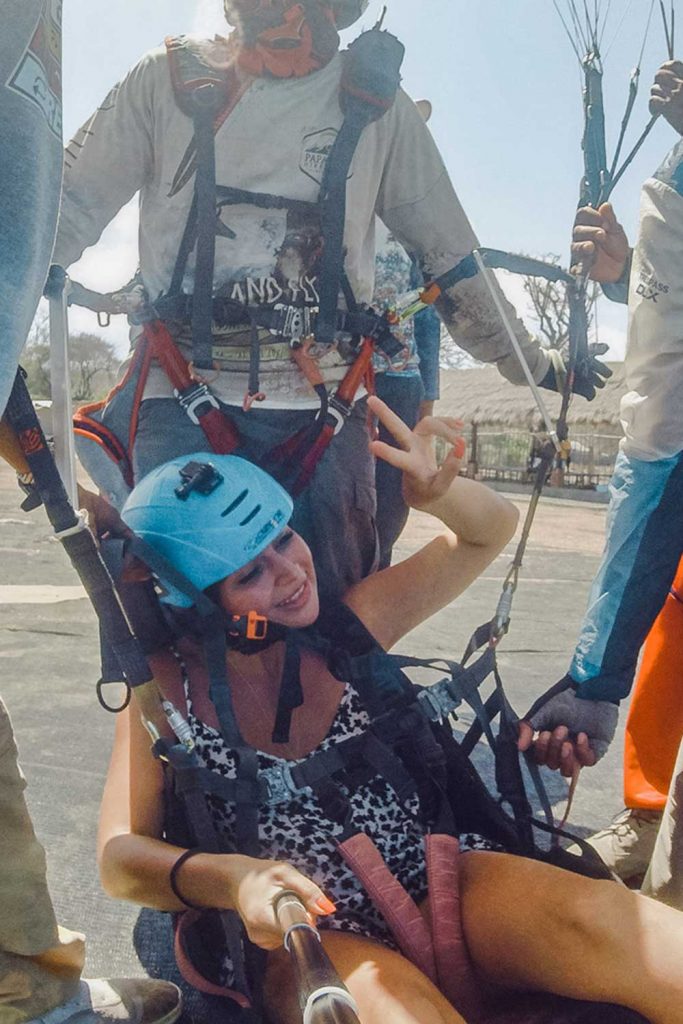 In case you have more questions about paragliding in general and experiencing it in Uluwatu, I have gathered all the most popular curiosities about this sport down below:

What do you need to wear for paragliding?

Here’s everything you need to know about what to wear and not to wear during your paragliding flight:

Now there’s really not much preparation before doing paragliding because your instructors will provide you with all the gear you need to fly safely. Nyang Nyang will provide mineral water as part of your package as well. You’ll also be given a GoPro on a selfie stick before you take off, so you can record your own video footage of your flight which they’ll send across to you by email or airdrop. If you’d prefer to take footage on your own GoPro, that’s completely fine too.

NOTE: If you suffer from motion sickness, I’d advise you to prepare for this with a motion sickness tablet as the soft, swaying movements while paragliding can be triggering. It will also help that you don’t eat a heavy meal before the flight to avoid dizziness. 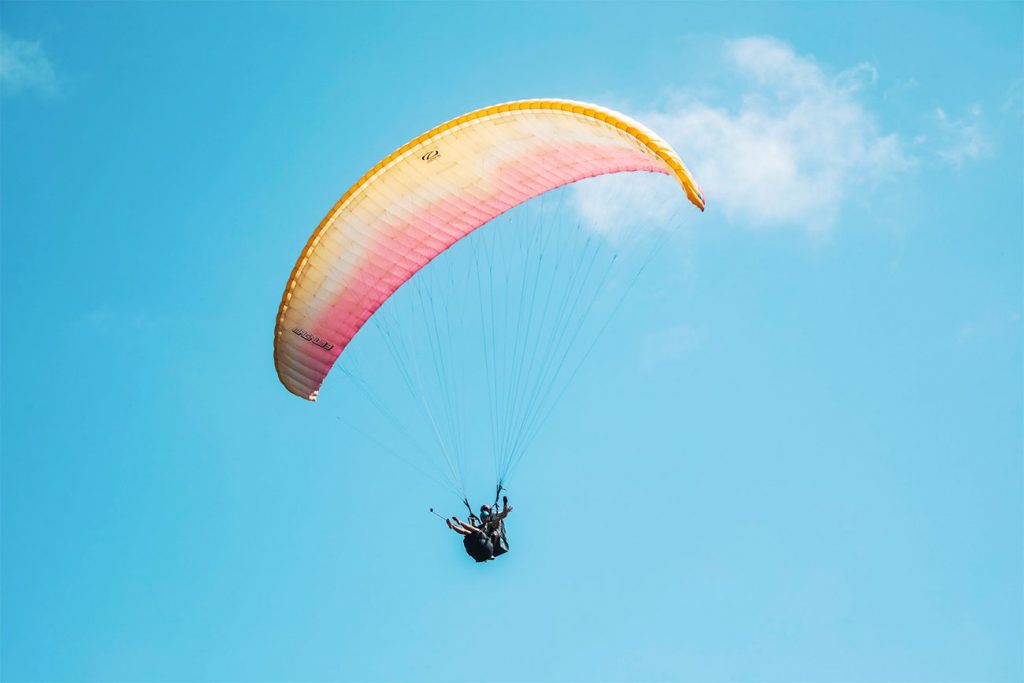 Paragliding depends on the weather conditions a lot. You cannot paraglide when it’s too windy, for example. The best time for paragliding in Bali is during the dry season, as there’s little to no rain, which takes place from April to November.

By the way, if you’ve made reservations and the weather doesn’t allow you to go paragliding, you can usually reschedule or cancel for no extra fee.

If you’re having second thoughts about the safety of tandem paragliding, it’s actually safer than riding a motorbike or horseback riding, for example. Pilots in Uluwatu are trained and certified to fly paragliders so you don’t have to worry about anything. Paragliding is also very safe because you are attached to the wing by at least 30 different lines to support you and your pilot’s weight.

In fact, paragliding is considered the safest among airborne sports because accidents and injuries are very rare. You’ll also have a backup parachute on hand to deploy in case an accident does happen. 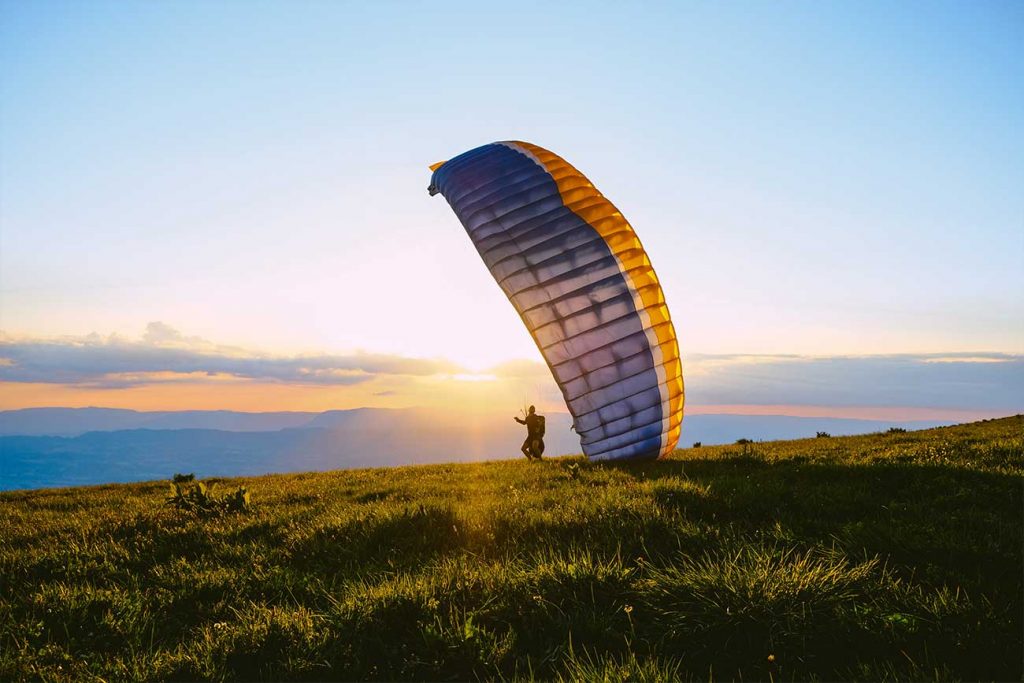 Prices vary from 20 to 100 US$ for paragliding in Bali, depending on your chosen company and the extra perks included in the fee. I got a great deal and paid around 25 US$ per person with Nyang Nyang Paragliding and we thought it was 100% worth it!

Paragliding usually takes 15 minutes. It is advised to arrive at least 15 minutes before the scheduled hour for instructions and preparations.

Where else can you go paragliding in Bali?

Although Uluwatu is one of the best places to paraglide in Bali, it’s not the only spot! Here are 3 more places for this activity:

RELATED READ: 6 Unmissable Things to Do in Ubud, Bali

BONUS: Other adventurous activities you can do in Uluwatu 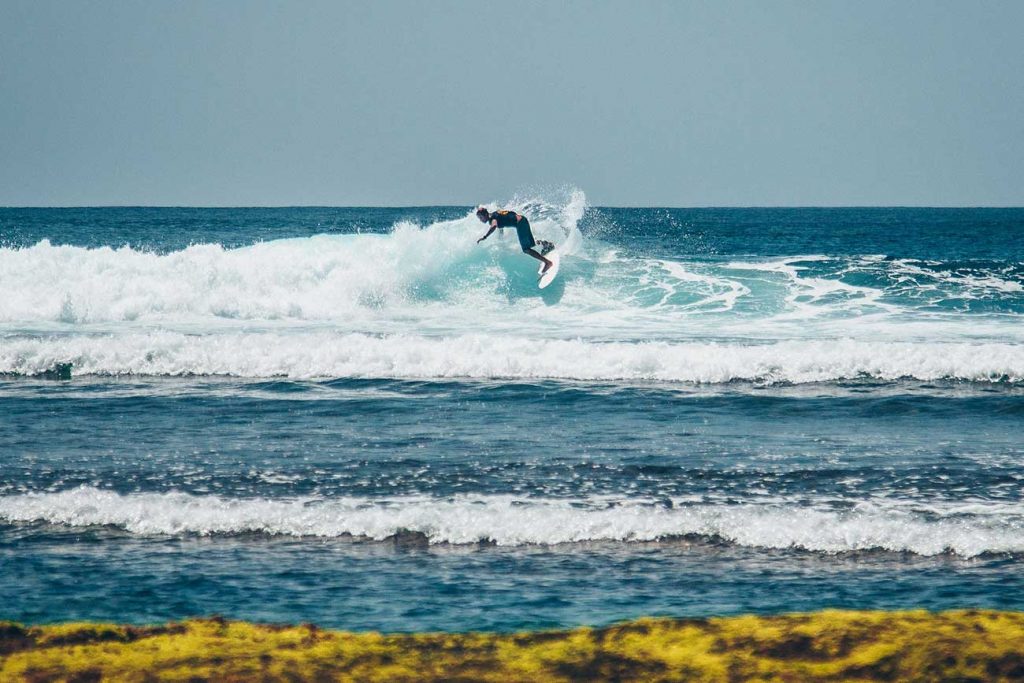 In case you feel like paragliding just isn’t for you, worry-not, as Uluwatu is a place of wonders where you can try several other adrenaline-inducing activities, such as:

This was my complete guide to Uluwatu paragliding. If you’ve never tried this activity before, my article above will tell you everything you need to know, in detail – where to do it, what to expect, what NOT to do, what to wear, all sorts of safety details, costs and more.

Excited yet? I hope so!

Except for paragliding, there are countless other exciting things to do in Uluwatu. If you’re curious to find out more practical info that will help you plan your itinerary, I recommend clicking here to find all my articles and stories about Uluwatu. And here you will find allll my posts about Bali. 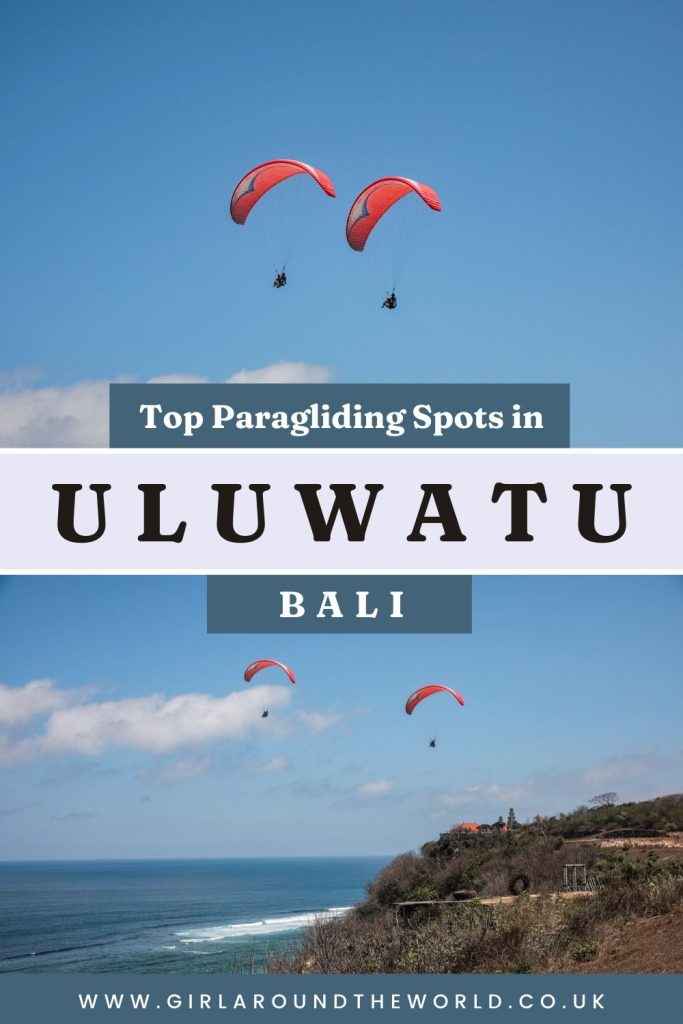 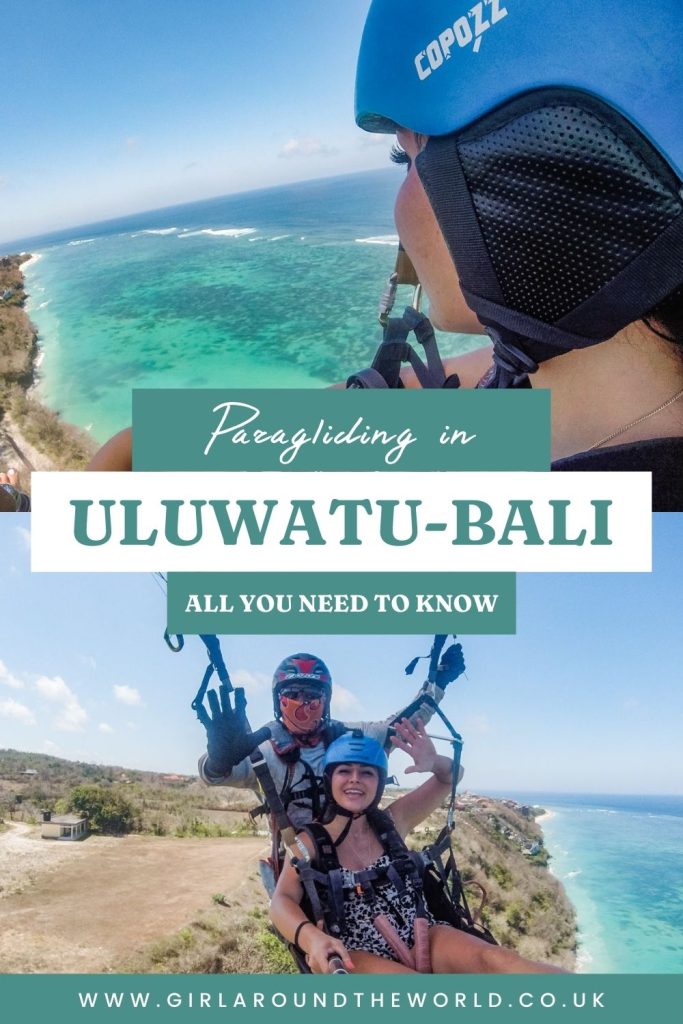