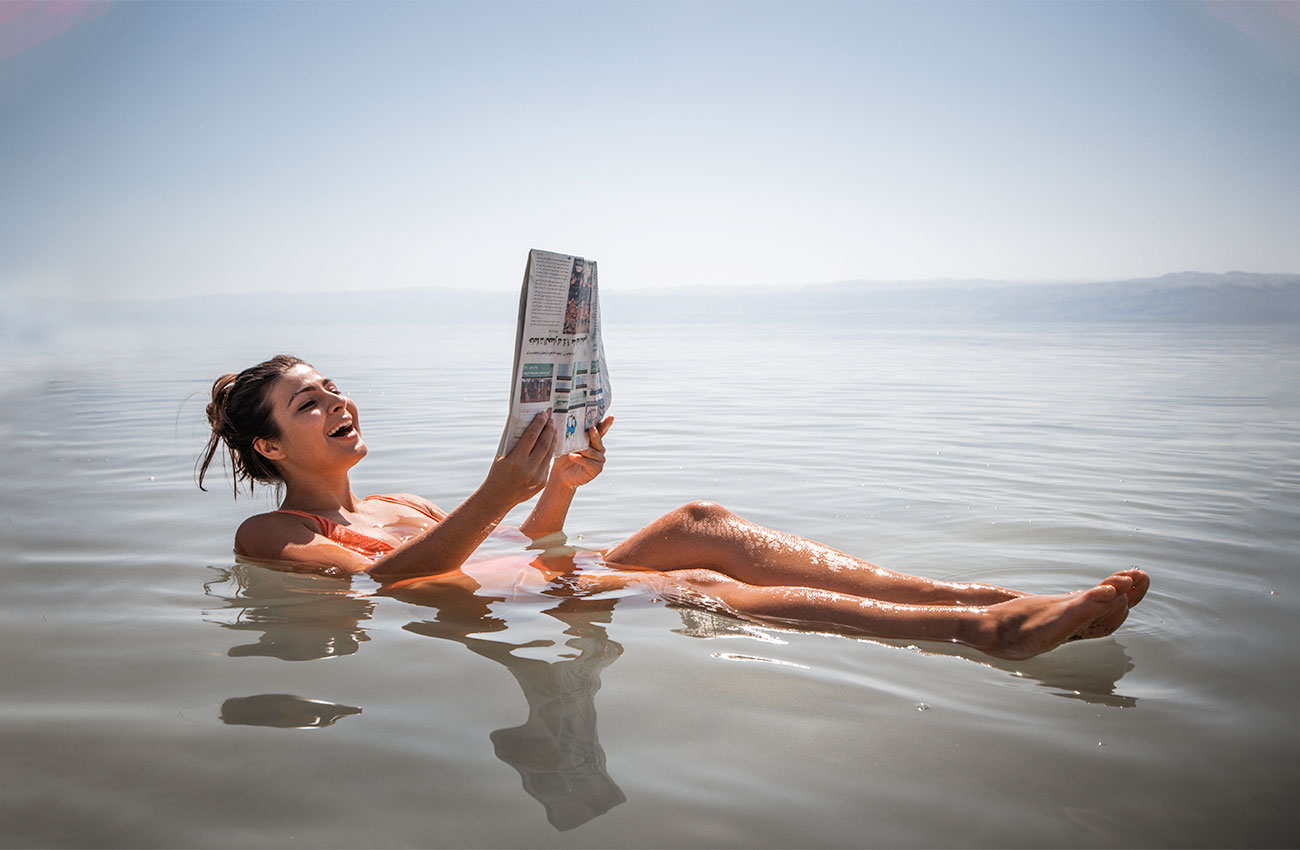 The Dead Sea is the lowest point on Earth and a cool destination that attracts visitors from all over the world thanks to its cobalt-blue, mineral waters with healing properties, rare animals and interesting sites!

If you’re planning a Dead Sea trip soon, this complete guide will tell you everything you need to know, from the best tours to important advice to keep in mind!

Quick facts: All about the Dead Sea 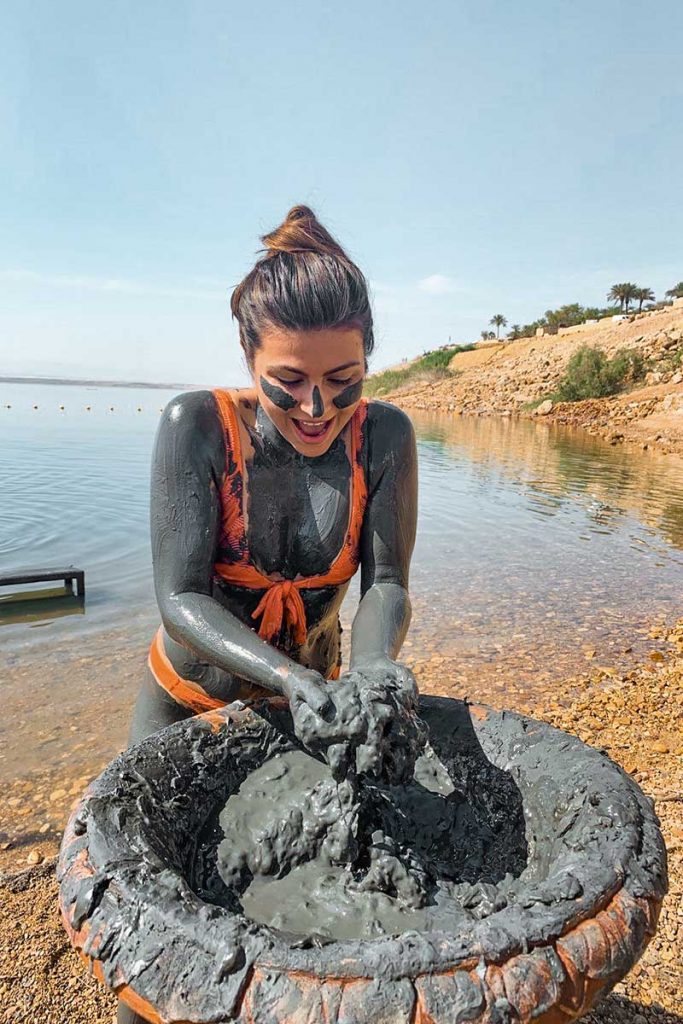 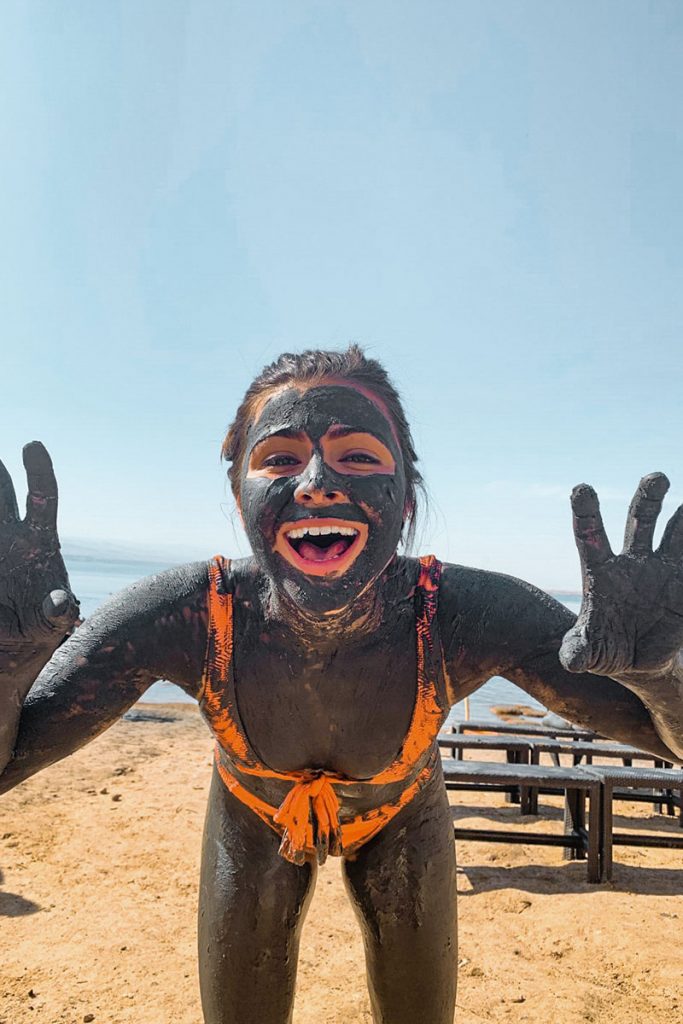 Located in the Middle East, at 408 meters below sea level, the Dead Sea is the lowest point on Earth. The vast salt lake is bordered by Jordan to the East and Israel and the Palestinian Territories to the West. And, needless to say, it is definitely an incredible place to visit!

Here are a few reasons to add it to your bucket list:

Wondering where exactly the Dead Sea is in Jordan? Here’s a map of the Dead Sea so you can clearly visualise its location: 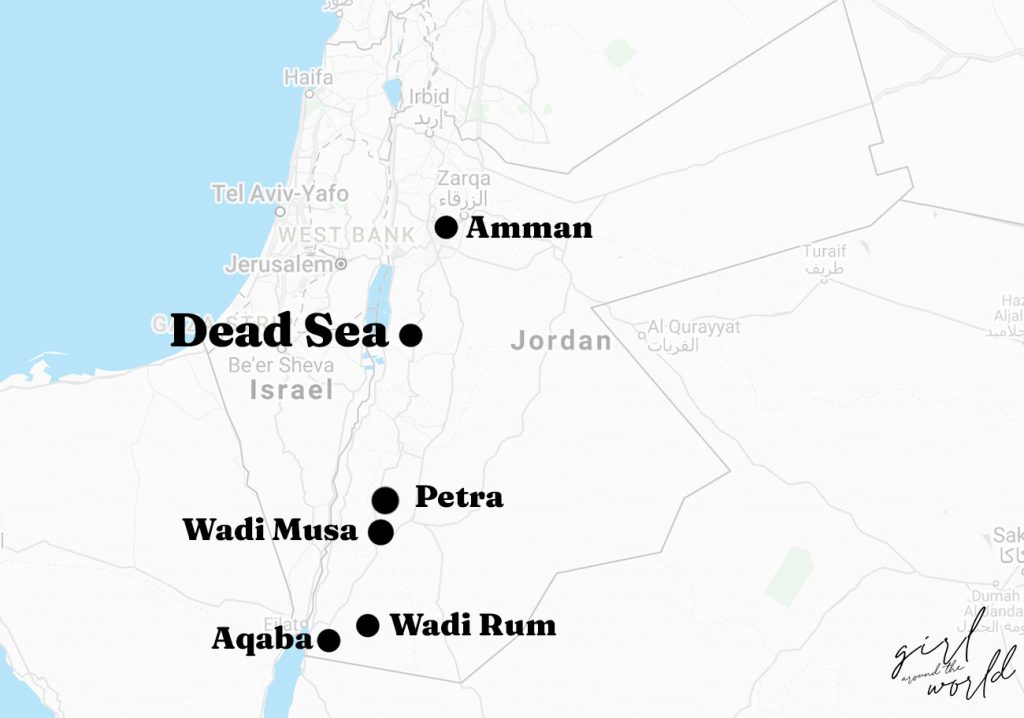 RELATED READ: Your Complete Wadi Rum Guide, Jordan – Everything You Need to Know Before Visiting

How to visit the Dead Sea

Now that you know some fun little facts about this unique place, let’s get to the technical things and some very useful information to know before your trip. First of all, know that you can access the Dead Sea from both Israel and Jordan.

FROM ISRAEL. On the Israeli side, there are a lot of day trips organised that take you to the Dead Sea and drop you back at your original destination.

FROM JORDAN. On the other hand, on the Jordanian side, there has recently been a development of hotels on the shorefront that offer luxury access to the Dead Sea. This is by far the easiest and most comfortable way of visiting but be aware that many of these beaches are solely for guest use only.

TIP: Some hotels in Jordan offer day passes to access the sea and there are also a number of public beaches you can visit. These will be cheaper, but will not include many of the amenities that the hotels have (freshwater showers, towels, parasols), which is a huge plus for washing the super salty water off your skin. Personally, I highly recommend booking a hotel for this trip.

Worry-not, as you can find my top recommended hotels down below! 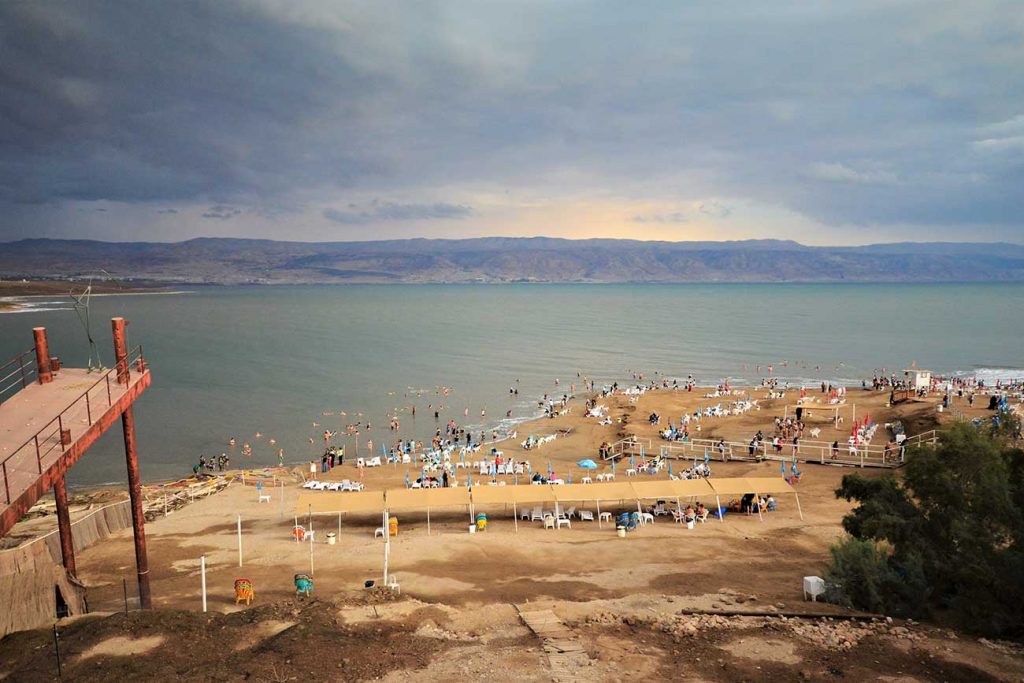 If you’re not down for a hotel stay but you also don’t want to stress about your Dead Sea visit, one of my most important pieces of advice is to book an organised tour that will take care of everything. As I mentioned above, you can take trips from both Israel and Jordan and, in order to make everything easier for you, I have hand-picked some amazing options departing from both destinations. I have listed them down below.

A quick note: you’ll see that most of these organised tours include some other destinations as well such as Madaba, Aqaba, Nebo or Petra (on the Jordanian side) or Bethlehem, Masada National Park or Ein Gedi Nature Reserve (on the Israeli side). Which is awesome – you’ll get to see more cool stuff and double the fun while you’re there!

One thing to know right from the start: there are both private and public beaches at the Dead Sea.

WHICH ONE SHOULD YOU CHOOSE?

The public ones are mostly free to access, but they usually don’t have a lot of amenities and they can be pretty crowded too. The private ones (usually belonging to hotels/resorts) have an entrance fee for tourists (around, let’s say, 30-40 US$) but they spoil you with luxury amenities. If you ask me, I’d say it’s worth it to pay the fee – or, even better, give in to the luxury of it all and just book a room at the hotel or resort. They have the best facilities, including spa treatments as well.

BEACHES ON THE JORDAN SIDE:

BEACHES ON THE ISRAELI SIDE:

Where to stay near the Dead Sea 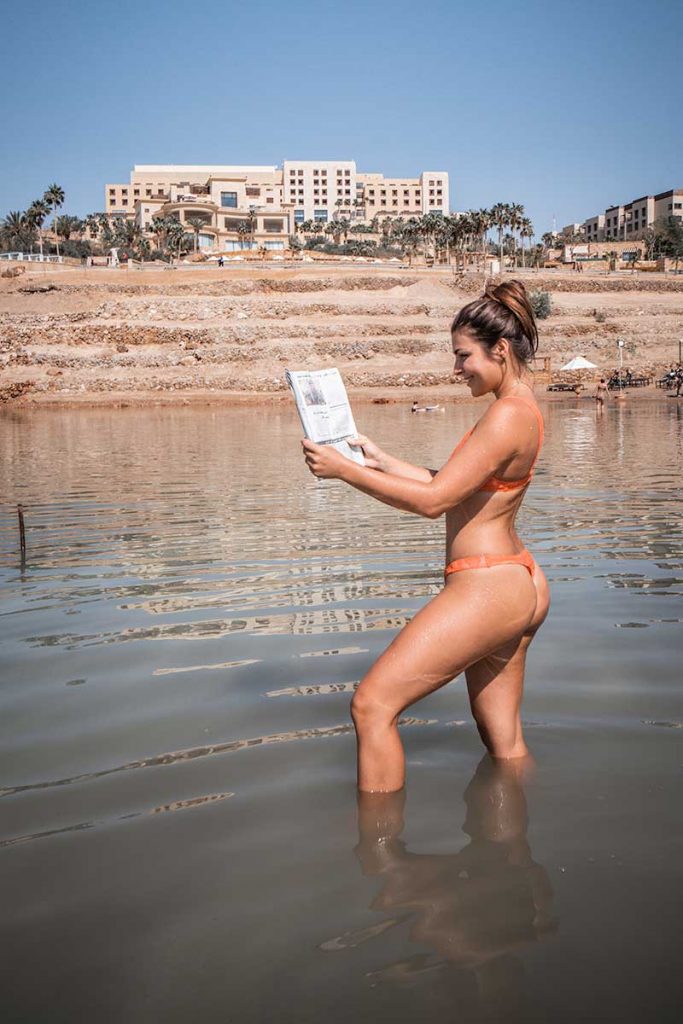 Here are my best recommendations:

ON THE JORDAN SIDE:

ON THE ISRAELI SIDE:

In case you don’t want to book a hotel room just to enjoy a little bit of floating in the Dead Sea, here is a list of hotels that offer a day pass for beach access even if you’re not staying there:

TIP: If you’re on a budget, there is the option to stay at hotels that are located further away, but these would require private transport to the beaches at the Dead Sea as the distance would be too far to walk.

How to get to the Dead Sea

Getting to the Dead Sea by public transport poses somewhat of a challenge to even the most battle-hardened travellers. Sadly, in Jordan, public transport in the area is sparse and doesn’t seem to operate other than on a Friday, which is mainly for locals attending their Sabbath.

This means that taxis and organised day trips (see my recommendations above) are your best bet in terms of getting to the Dead Sea or the hotels around it. Here are some taxi trip price references:

Alternatively, if you’re in Israel, you can usually travel from Tel-Aviv (on the 421 bus that runs once a day) or from Jerusalem (bus route 486 that runs five times a day), but the journey will be around three hours one way.

RELATED READ: Are you planning to visit Petra after the Dead Sea? If you aren’t, you should! Check out this article for must know tips: Complete Guide to Petra, Jordan – Best Petra Tours, Sights, Hotels and Tips 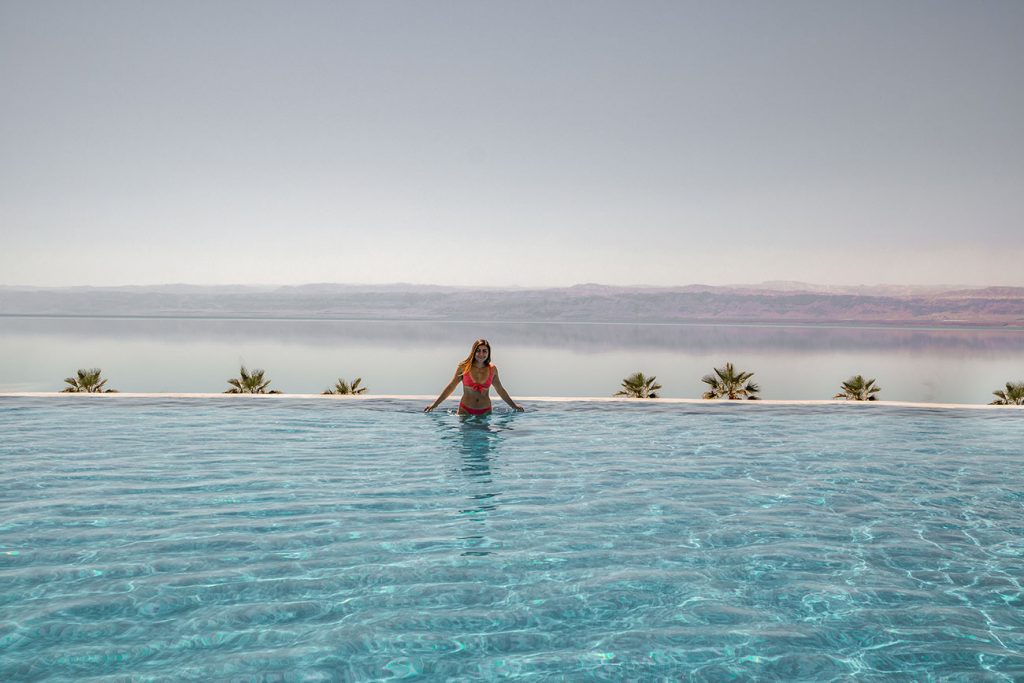 WHY IS THE DEAD SEA DEAD?

If you’re wondering why the Dead Sea is called the Dead Sea - the answer is simple! The water here has a salt concentration of 34.2% (10 times more than ocean water), so it’s basically impossible for any aquatic beings or plants to live in it.

HOW WAS THE DEAD SEA FORMED?

The Dead Sea was formed millions of years ago when it was only a simple saltwater lagoon, connected to the Mediterranean Sea. After the tectonic plates shifted, the water connection to the ocean was lost, so the Dead Sea transformed into a lake that became saltier and saltier as the water evaporated over time.

HOW BIG IS THE DEAD SEA?

WHEN IS THE BEST TIME TO VISIT THE DEAD SEA?

The busiest time at the Dead Sea is during spring (March to May) because of the nice temperatures and lower chances of rain. June is also a very good month to visit, as the temperatures are not too hot yet.

ALL ABOUT THE DEAD SEA MUD BENEFITS

The Dead Sea mud is said to be a thing of legend. You’ll see people caking it onto their bodies and faces, letting it dry out in the sun until it cracks before washing it off in the sea. This mud is found all around the seabed and it is known to have a whole lot of health benefits, backed up by extensive research. These include: improving skin conditions such as Psoriasis, arthritic pain relief, soothing chronic back pain, helps treat acne, reducing skin impurities - and more. BUT! If you have hypersensitive skin, check that you don’t have any sensitivities to any of the minerals it contains or speak to your doctor or dermatologist if you are unsure.

BONUS #2: Useful tips to know before bathing in the Dead Sea 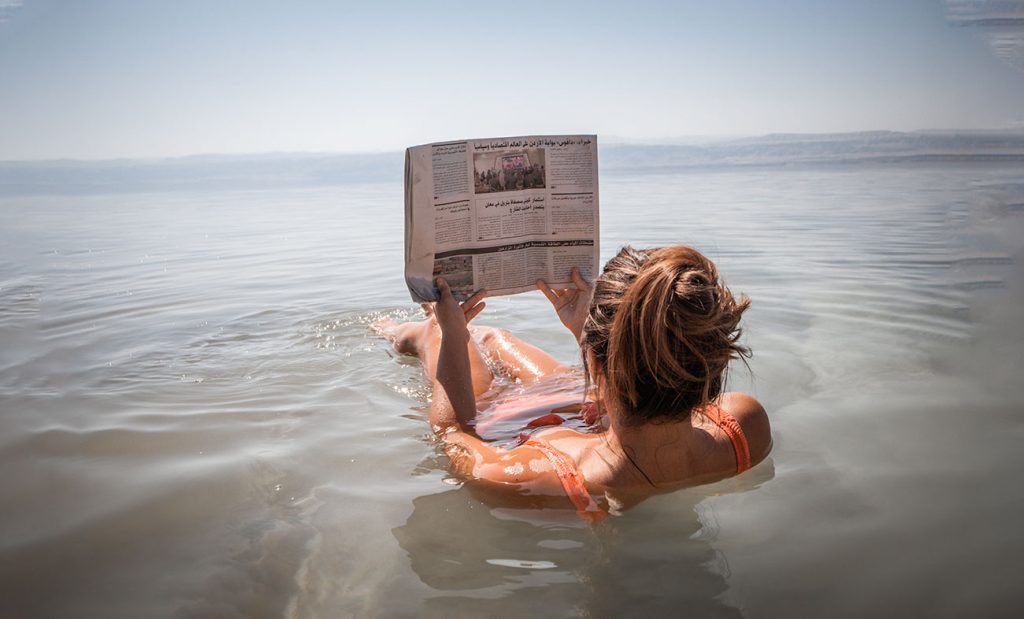 This was my complete Dead Sea travel guide! I tried to collect the most important information that I’ve learned during my trip here – such as the best tours available on the market right now, suggestions for accommodation and the best beaches, transportation and more! I hope all this precious info will help you organise the best Dead Sea holidays!

If you’re curious to read more about other exciting destinations in Jordan, I recommend clicking here to discover all my adventures there.

Time to spill the T… ☕️ What’s keeping yo

Fall face first into life! 💫 Ooff, have I been

Woke up in Dubai! 🇦🇪 I’ve spent the last