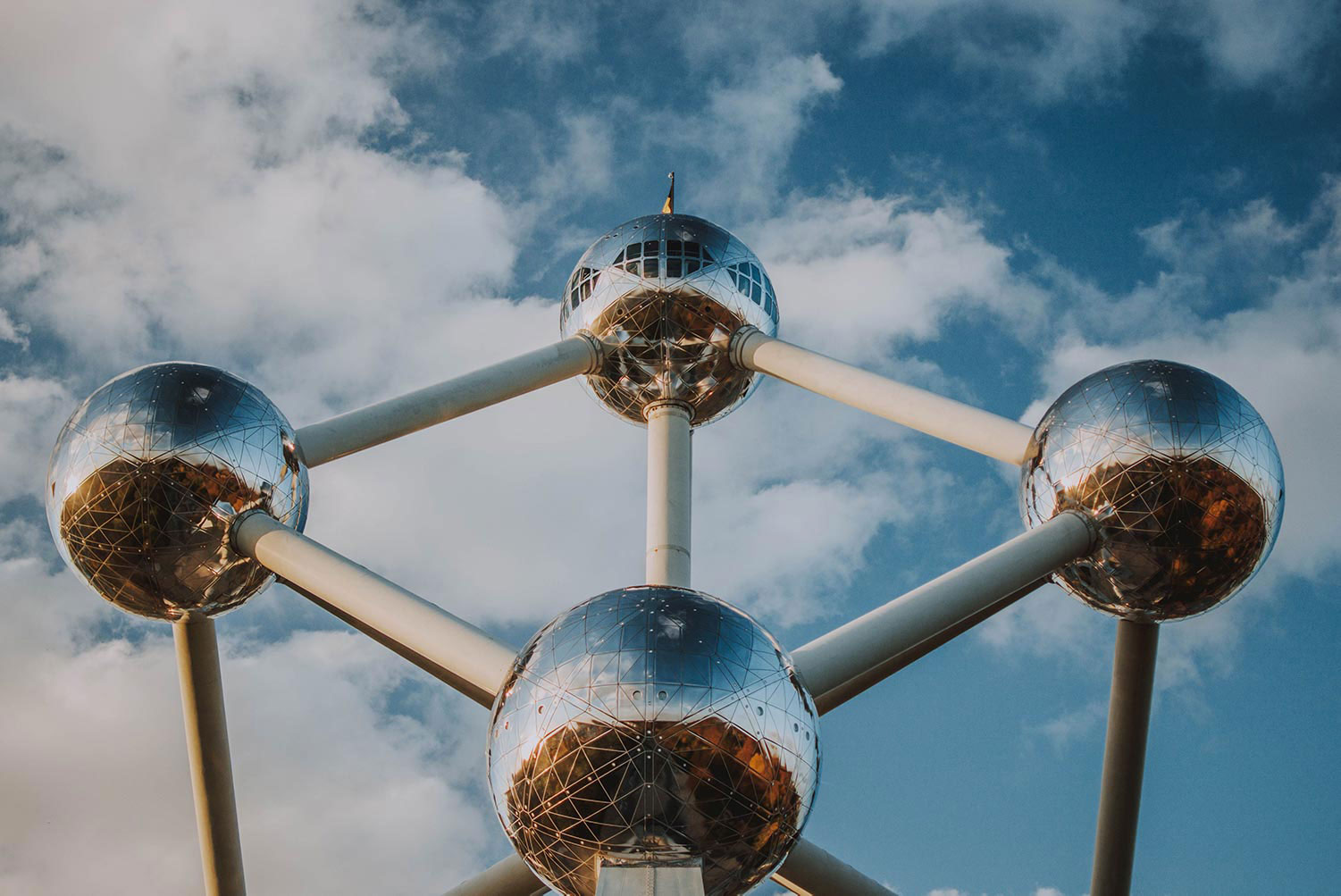 Travel Guide: How To Visit the Atomium in Brussels, Belgium

Travel Guides, Belgium, Brussels, Europe
Why Visit
Why was it built
How to get there
Opening hours
Best time to visit
Ticket Prices
Brussels Card
Visiting inside
Where to stay
Nearby attractions
Best restaurants nearby
Fun facts

The Atomium is the symbol of Brussels and it’s a real sight to see at least once in your lifetime! If you’re planning a trip to Belgium soon, I’m guessing this landmark is definitely on your bucket list. If so, then you opened the right article!

In this post, I will tell you everything you need to know about how to visit the Atomium, from the ticket prices to opening times, when to visit, how to get there from central Brussels, where to eat nearby and more.

First of all, is the Atomium worth visiting?

In short: yes! At the absolute least – a quick glance from afar.

The Atomium is a remarkable sight. Firstly, it is massive. Secondly, the architecture is insanely cool. Thirdly, (and this may sound super childish, but here goes), it is seriously shiny, so don’t forget your sunnies unless you want to be Squinty-McGee all day. Even though it’s impressive, I’m not sure you could call it beautiful. The obscure Atomium structure looks like it’s been teleported out of a 1960s sci-fi film. For me personally, that’s just another tick on the pro’s list for reasons to visit.

Now there’s one thing left to find out: if you’ll visit the inside of the Atomium or not. And all the information below will help you decide for yourself!

Everything you need to know before you visit the Atomium 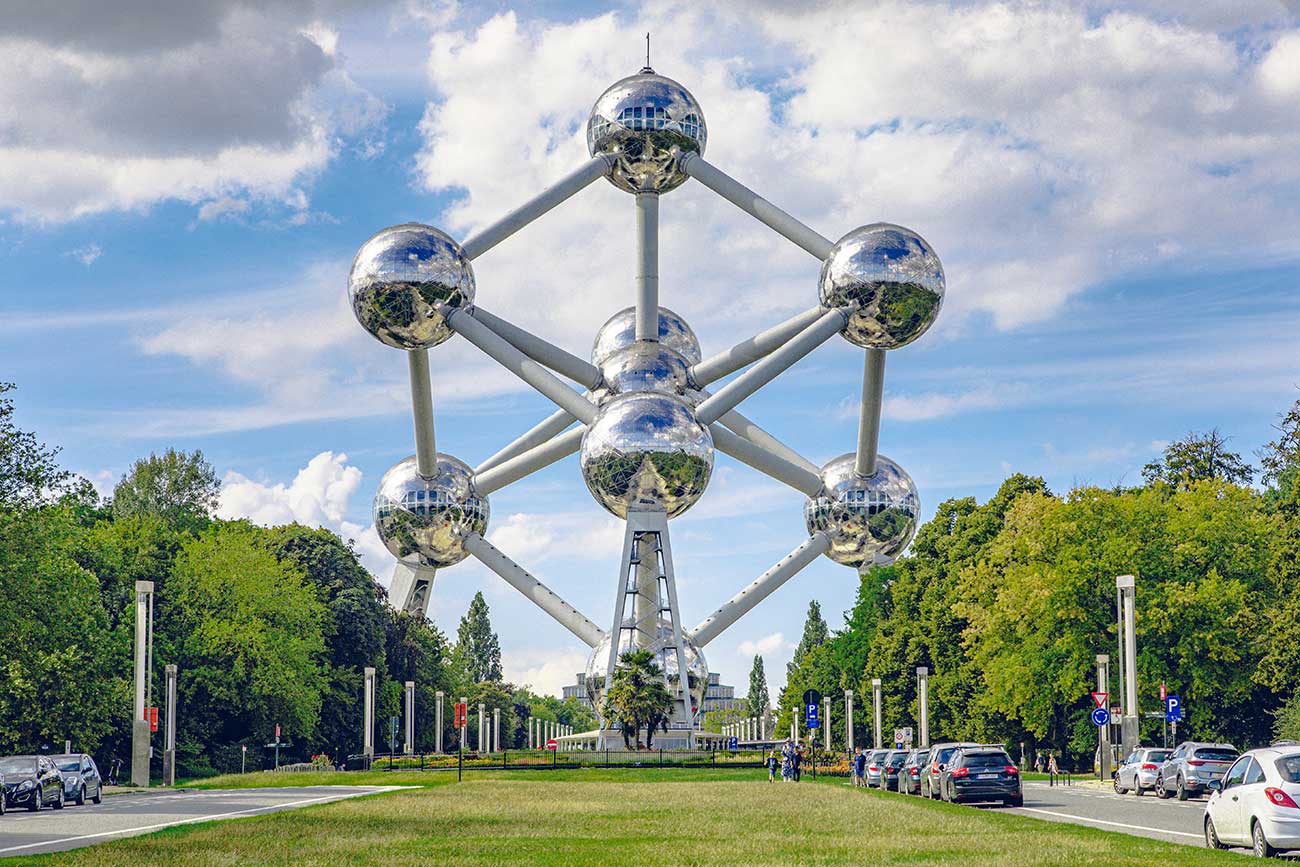 Why was the Atomium built?

Located on the Heysel Plateau, the Atomium was initially built for the first post-war Brussels World Expo in 1957 and it was meant to be a central piece of the event. Why did they choose atoms, though? Well, science was extremely popular in the 50s in Belgium and people believed it’s one powerful activity.

Nowadays the landmark is a significant tourist spot, housing a museum devoted to the historical exhibition. It wasn’t intended to be a permanent part of the Brussels architectural landscape – the initial plan was to keep it for 6 months only. However, just like the Eiffel Tower in France, the Belgians loved it so much they decided to keep it!

The Atomium derives its name from a combination of Atom and Aluminium. The unique structure represents an iron crystal magnified 165 billion times. Originally, the spheres were coated with sheets made of aluminium, but they faded over time, so they were replaced with stainless steel in 2004.

RELATED READ: 12 Top Attractions in Brussels, Belgium – A Complete Guide to the City

How to get to the Atomium in Brussels

The Atomium is located in Northern Brussels, around 8-9 km from the city centre, in Atomium Square. 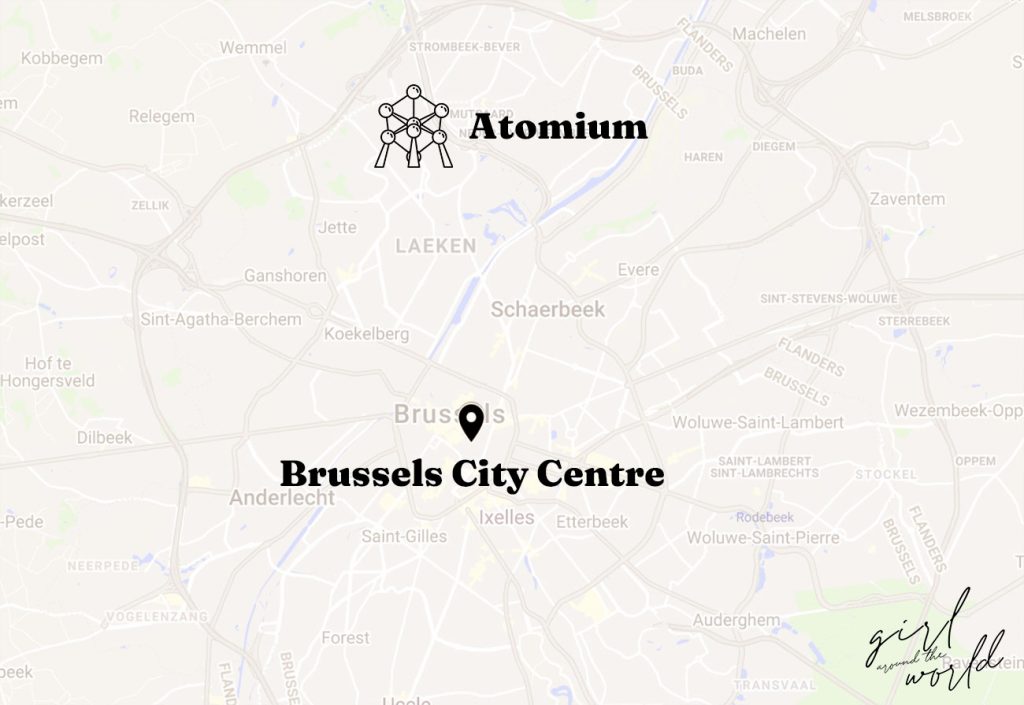 There are different ways of getting to the Atomium from the centre of the city, depending on your preferences:

If you only want to see the exterior, you can do so any time, any day. It’s super pretty at night too, when it’s all lit up!

Best time to visit the Atomium

HOW LONG TO SPEND AT THE ATOMIUM: 1 to 2 hours should be plenty, queuing included. You can spend more time in the surrounding area – for things to do around the Atomium, please check the dedicated section further below.

Below I’ll list the Atomium price for all types of travellers:

Free entry if you have the Brussels Card. More information about what this is below.

NOTE #1: Your Atomium ticket provides access to the full Atomium Museum inside, but also free entry to the Design Museum (right next to the Atomium).

WHERE TO BUY YOUR TICKETS:

You can buy adult tickets with free cancellation here. For all other categories, you can buy your tickets on the official website here.

NOTE #3: If you want to learn as much as possible about the Atomium building, I recommend downloading CloudGuide on your phone – they have a pretty nice Atomium audio guide. You can get the free app on iPhone here and on Android here.

Should you buy a Brussels Card for the Atomium?

Brussels Card is a typical tourist pass that offers:

In my humble opinion, the Brussels Card is only worth it if you have at least 3 days to spend in Brussels and you want to make the best of it. This means seeing as many attractions as possible and using public transport a lot. Otherwise, I think it costs a bit much. As usual, I recommend making a list of all the places you want to see, calculate the costs of all the tickets and then see if the tourist pass is worth it for you or not.

NOTE: You must exchange your online Brussels Card for the actual card at any Tourist Office once you arrive in the city (they’re close to most train stations and other popular spots in the centre).

Is it worth visiting the inside of the Atomium?

Apart from the three outer spheres, you can visit the insides of the other six if you choose to purchase a ticket. There is a viewing platform and restaurant in the 7th and highest sphere. With 360 degree views of the surroundings, they say you can see all the way to Antwerp if the weather is good – so you can expect to take some pretty nice pictures from up there.

The other spheres hold a minimalistic museum dedicated to the Atomium expo from 1957, continuing to the present day. There is also a tourist shop selling merchandise inside the building but beware of the sky-high prices.

I think the Atomium interior is worth it for the panoramic views from the highest level (100m tall!) and the museum if you’re an architecture fan. Plus, it’s pretty fun to walk around the spheres and to see the light shows on the elevators! But if you’re on a budget or you’re short on time, just admiring the outside and taking some pics should be enough.

RELATED READ: Where to stay in Brussels – 3 Best Areas and Hotels

Where to stay near the Atomium in Brussels

If you’re really passionate about the Atomium and want to book a hotel as close to it as possible, I got you! I have selected some excellent accommodations below for all budgets, so you won’t need to waste time searching yourself. But please keep in mind that this landmark is not located in the city centre, but in the northern part of Brussels, half an hour from the centre by public transportation.

Find more hotels near the Atomium

Things to do near the Atomium

Because the Atomium is not located in the city centre, it makes all the sense in the world to make the best out of your trip there and visit some other cool attractions nearby. Here are your options:

Best restaurants near the Atomium

Sadly, there aren’t a lot of restaurant options around the Atomium. Still, I have gathered all the information you need about the ones available:

MY RECOMMENDATION: Visit the Atomium, grab some Belgian fries from one of the friteries nearby and then return to Brussels centre for your next meal.

BONUS #1: Where to go for the best views of the Atomium

If you’re not interested in seeing the inside of the Atomium and admiring the panoramic view from the top level, maybe you’ll prefer taking some postcard-worthy pictures of it to bring back home as a memory! Here are the best spots to get a view of the Atomium:

BONUS #2: Fun facts about the Atomium 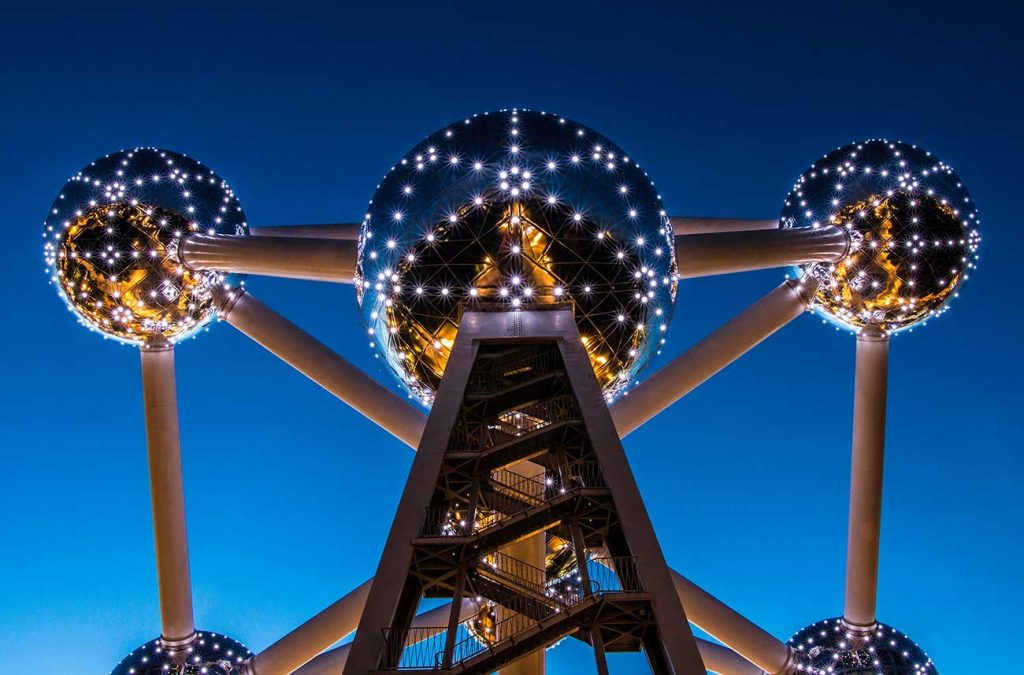 Let’s get you all hyped and excited for your upcoming trip with some FUN Atomium facts:

This was my complete guide to the Atomium in Belgium! In this post, I have told you everything you need to know about when, how and why to visit the Atomium and I offered you updated info about ticket prices, nearby attractions, nearby restaurants and more. In case you were wondering if the Atomium is worth visiting or not, I’m pretty sure the article above has already answered your question!

If you need more help in planning your upcoming Brussels trip, I recommend clicking here to find all my articles about this fun city. 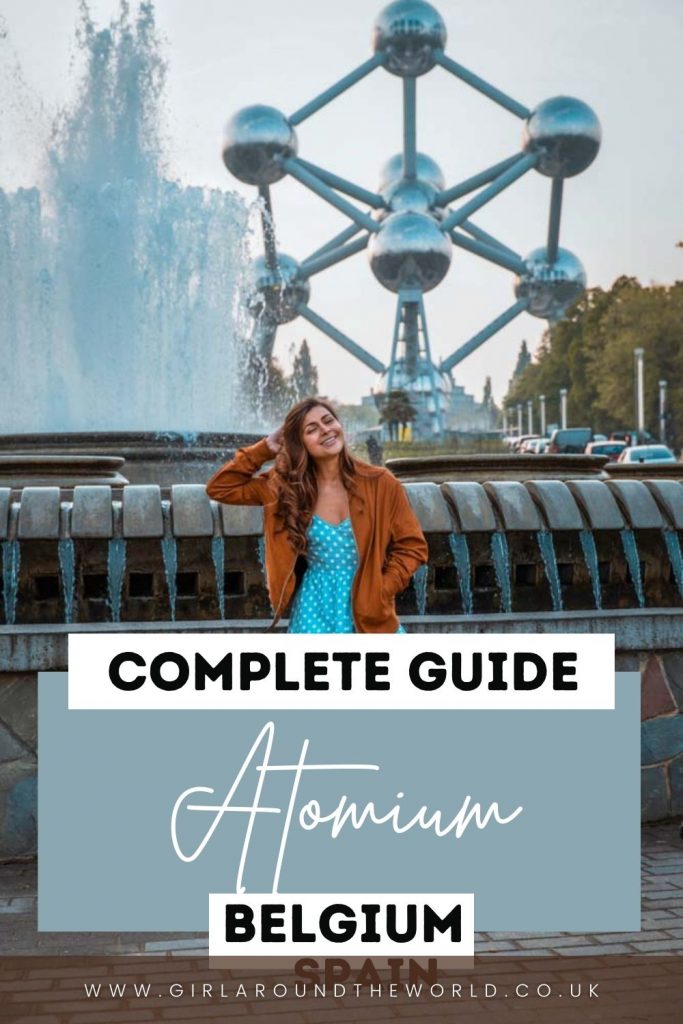