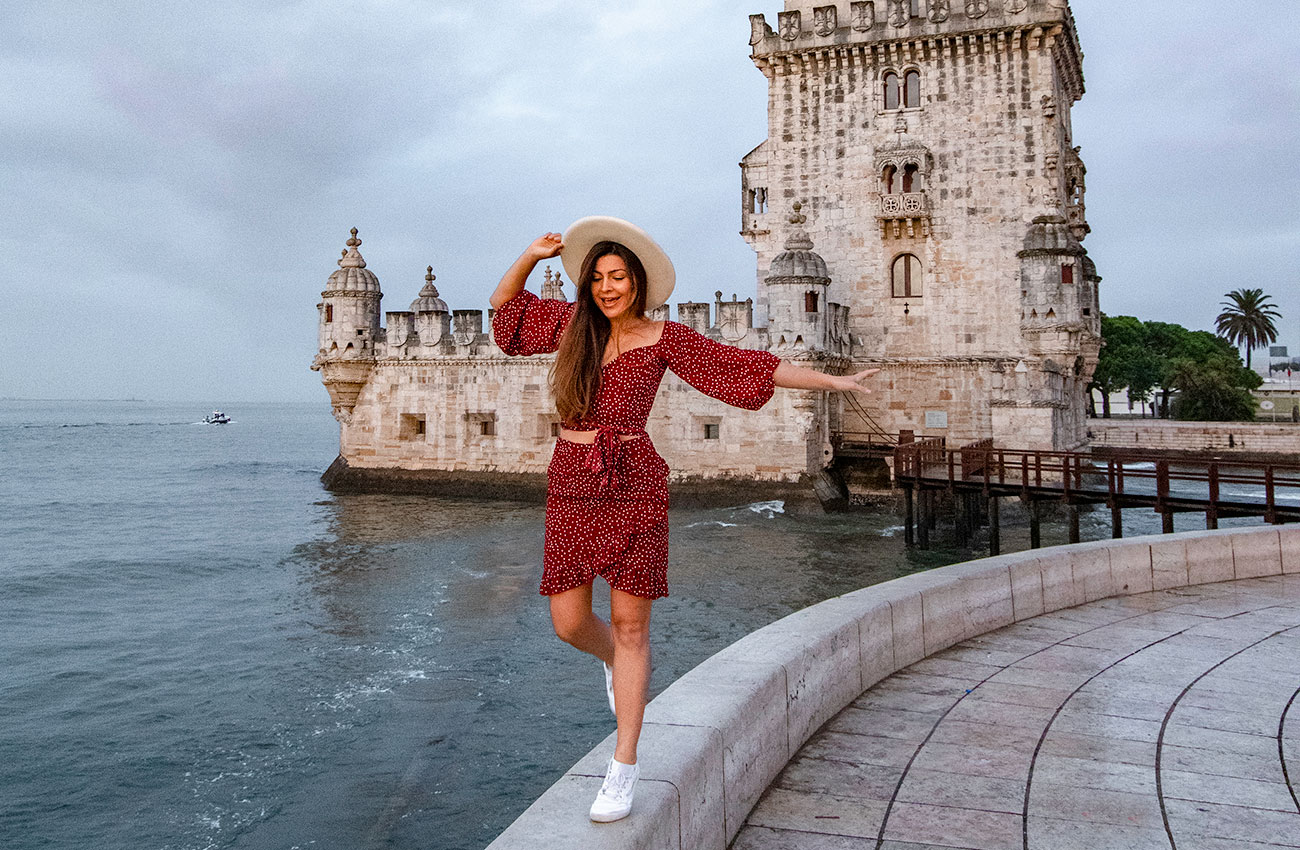 Europe, Lisbon, Portugal, Travel Guides
Is it worth it?
Brief history
How to get there
Opening hours
Best time to visit
Tickets
Top tours
Visiting inside
Nearby hotels
Nearby attractions
Bonus: Best tips!
Bonus: fun facts!

Belem Tower (“Torre de Belem” in Portuguese) is located in Lisbon, Portugal and it’s one of the most famous tourist attractions in Portugal. If you’re planning a trip there soon, you’re in luck! My ultimate guide will tell you everything you need to know about this historic site – how to get there and when to visit Belem Tower, how much it costs, things to keep in mind and things to avoid. And more!

One thing to keep in mind: because it’s such a popular landmark, Torre de Belem is visited by thousands of people, so the queues to enter can be VERY LONG and the process of buying your ticket can be a bit tedious. No worries though – just follow my tips below for a smoother experience. You can thank me later for it!

First of all, is Belem Tower worth visiting? 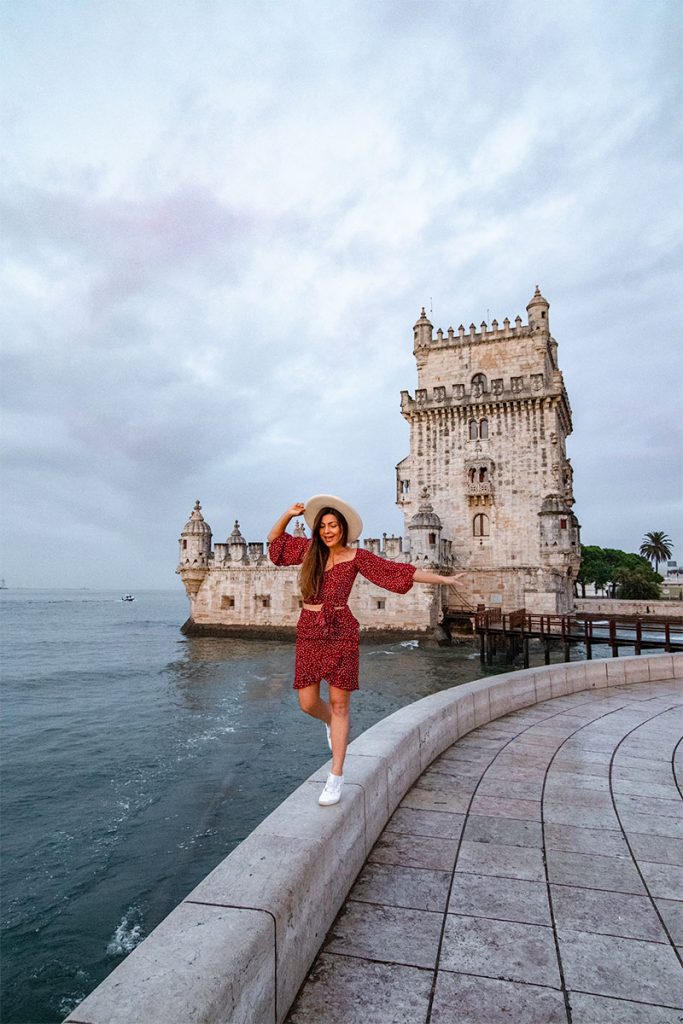 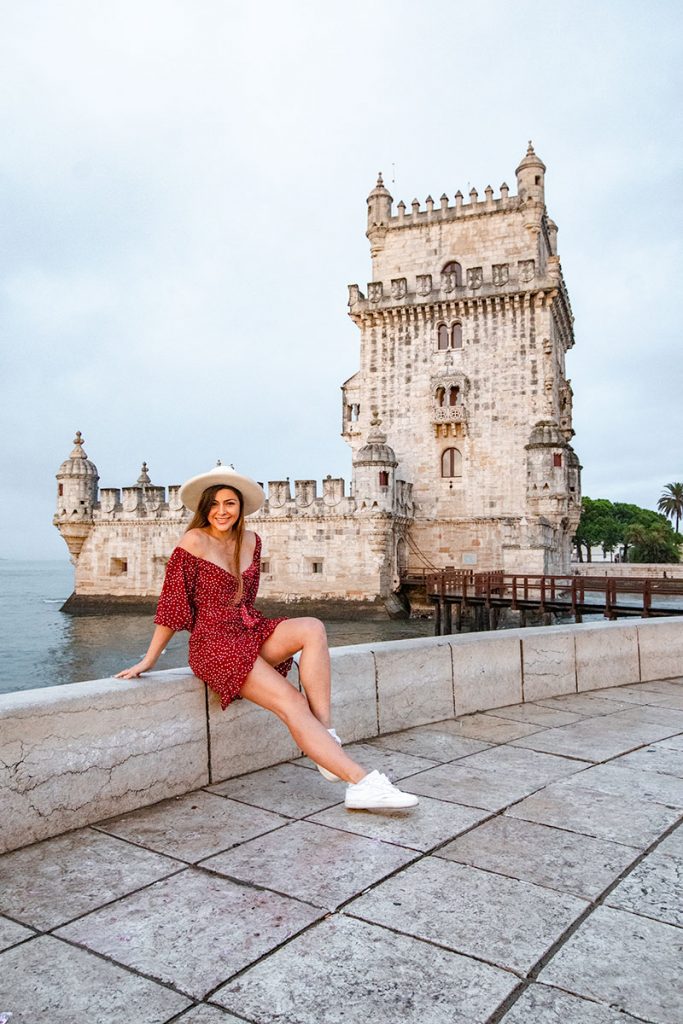 Yes, yes and yes. After all, Belem Tower is not the most iconic attraction in Lisbon for nothing, right?! The tower is 500 years old, it’s located on the northern banks of the Tagus River and it’s standing proof of Portugal’s glorious Age of Discovery. The tower was built in Manueline architecture (with hints of other architectural styles such as Italian, Islamic, Moorish and North African) and it’s truly stunning – both on the outside and on the inside.

The Belem Tower has been a UNESCO World Heritage Site since 1983 and it was inaugurated in 1521. Inside, there’s a spiral staircase to be explored, a rooftop terrace for incredible views and lots of intricate architectural details and beautiful rooms to admire. In short, Torre de Belem is a real gem worth exploring by anyone visiting Lisbon!

Now that I’ve convinced you to check it out, let’s find out all the important things to know before visiting Belem Tower: 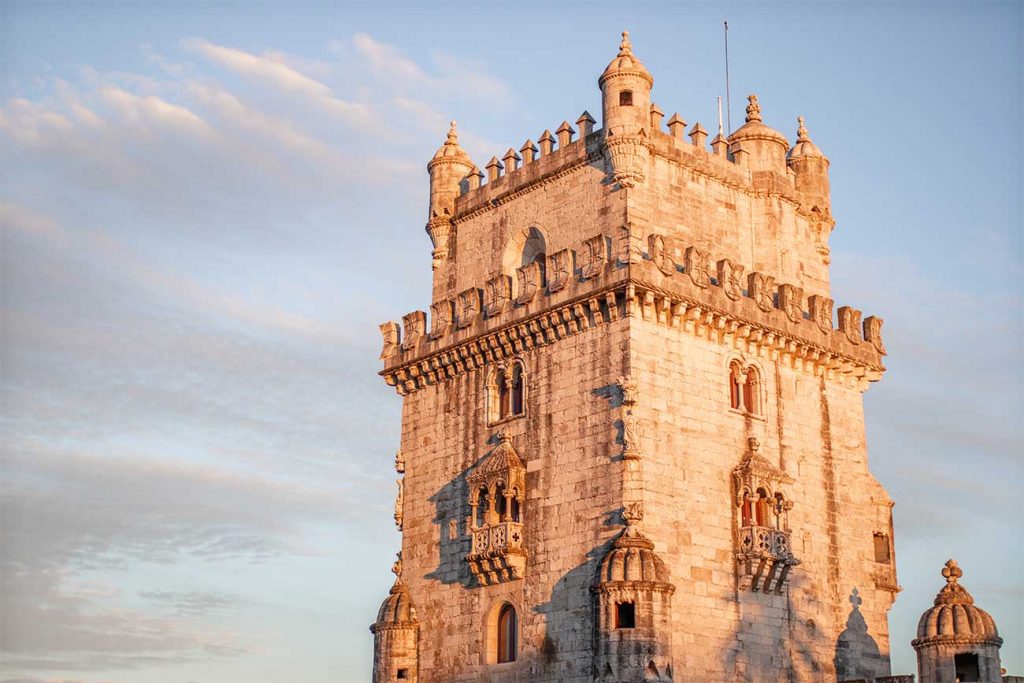 Let’s start at the beginning. The construction of the tower began under the initiative of Francisco de Arruda (a military architect and sculptor) and it lasted from 1514 until 1520. The main goal was to create an imposing structure that would guard the mouth of the Tagus River, which was the main gateway to Lisbon. You can still see the cannons on the lower level today, which were placed there for this exact purpose – defence.

The tower was first known as “Castelo de São Vicente de Belém” (Castle of Saint Vincent of Bethlehem). The purpose of the tower switched to be a state prison in 1589. This lasted about 250 years. Then Belem Tower became a customs port, then a telegraph station, then a lighthouse.

Belem Tower became a UNESCO World Heritage Site in 1983 and it stands as proof of Portugal’s maritime powers and its Age of Discoveries. A full restoration and conservation took place in 1998, bringing Torre de Belem to the state you can see it in right now. Last but not least, the tower was classified as one of the “Seven Wonders of Portugal” in 2007.

Where is Portugal’s Belem Tower?

Belém Tower is located in the Belém district, around 9 km from Lisbon city centre.

Here’s a map that will show you its exact location: 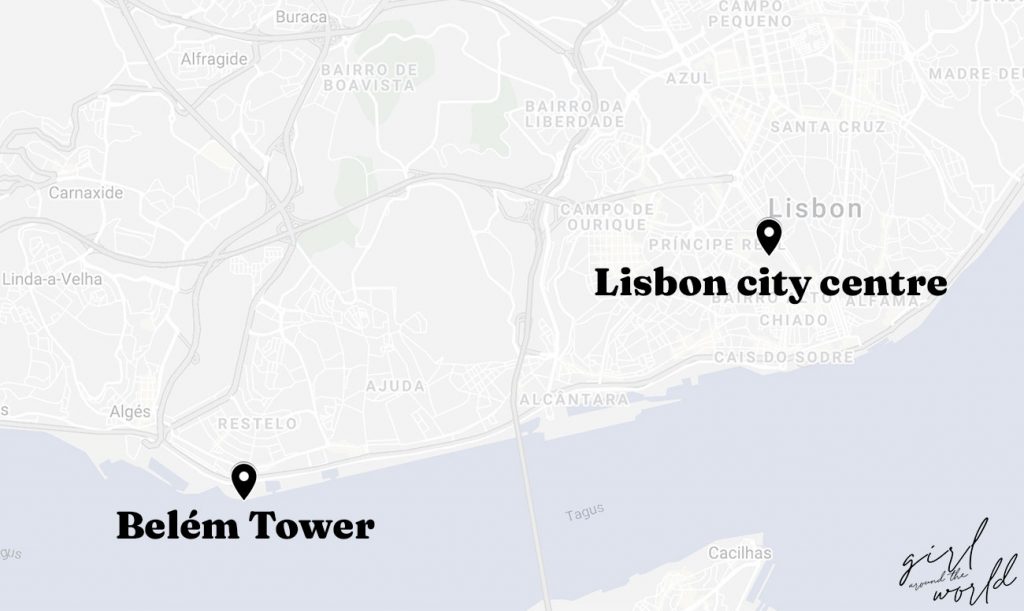 How to get to Belém Tower

Although Belém Tower is not located in the heart of the city, it’s very easily accessible. To get there, you can take:

NOTE: If you’re going by car, please keep in mind that there is limited street parking nearby. 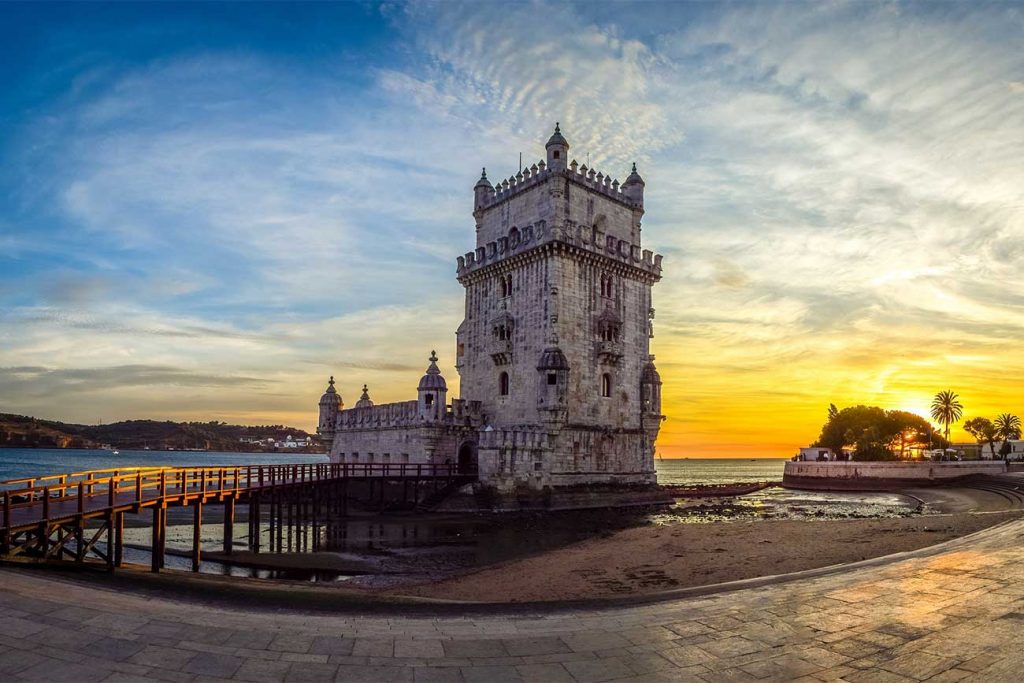 Closed on: Mondays, 1st of January, 1st of May, Christmas Day and Easter Sunday.

The tower opens at 10:00 AM, but I recommend getting there at least 1 hour earlier in order to explore the outside of the building and take some pictures (that’s when the sun is in front of the tower, not behind it, so you can take the BEST photos). The tourist crowds will arrive late in the morning (usually 30 mins before opening time) and they last until the afternoon. So, I recommend visiting as early as possible or at the end of the day, a bit before the last entry – maybe you’ll catch the sunset too!

How long should you reserve for the visit: 45 minutes will be enough. No need to reserve an entire day for it!

Tickets for Belém Tower in Lisbon 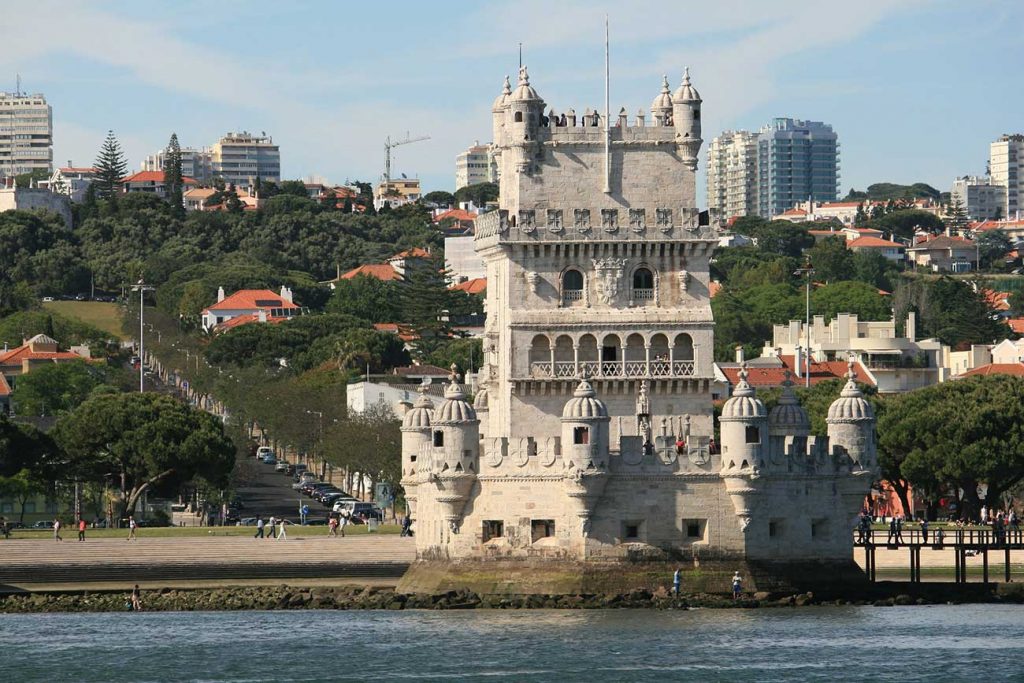 Here is the complete list of Belem Tower ticket types:

WHERE CAN YOU BUY YOUR TICKETS:

NOTE #1: You’ll have to wait in line to enter regardless if you buy your tickets online or if you have the Lisboa Card. Only after you enter the site does the line split in two – one for the people who need to buy a ticket from the ticket counter and one for the online tickets.

NOTE #2: Yes, the lines can get quite long, that’s why I recommend arriving 30 minutes before the opening time if you’re not keen to wait around (especially in Summer!).

Should I buy a Lisboa Card for Torre de Belém?

The Lisboa Card is the official city travel card for Lisbon and it offers you:

GOOD FOR: Travellers planning to explore lots of attractions around Lisbon.

NOTE: To use it, you must exchange your online Lisboa Pass for the actual card (it looks like a credit card) at any Ask Me Lisboa office around the city.

Get your Lisboa Card here 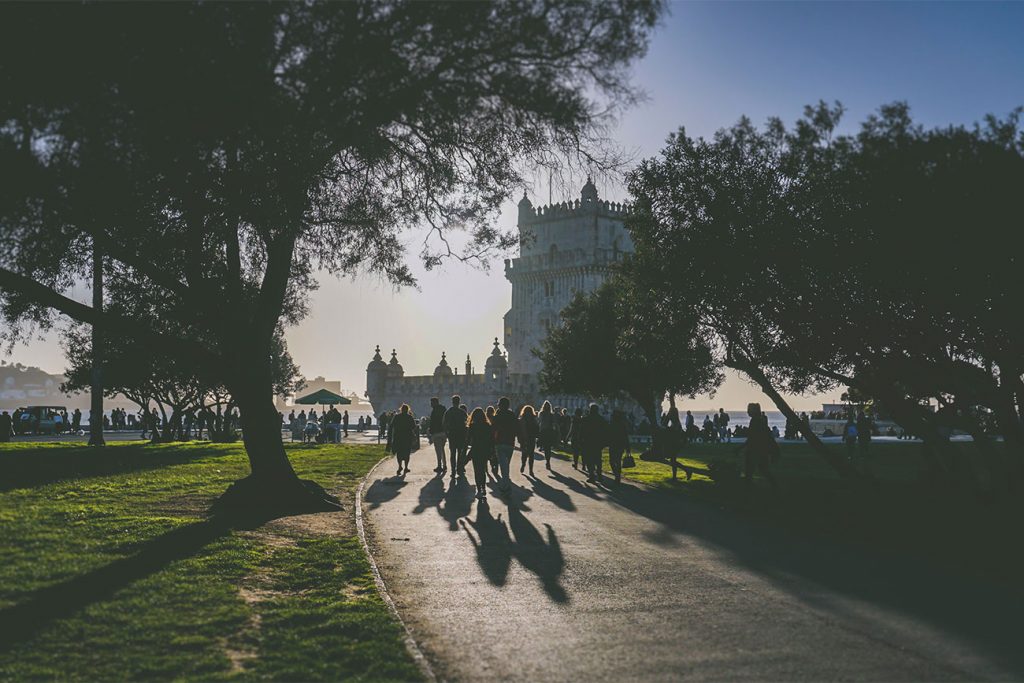 If you want to visit the Belém Tower in Lisbon with a local, knowledgeable guide that will tell you lots of precious information about this 16th-century site, then I recommend booking a guided Belem Tower tour! Combined tours are also a good option if you’re short on time and want to see some other things on the same day. Here are my hand-picked recommendations so you won’t need to search anymore!

What can you see at Lisbon’s Belem Tower? 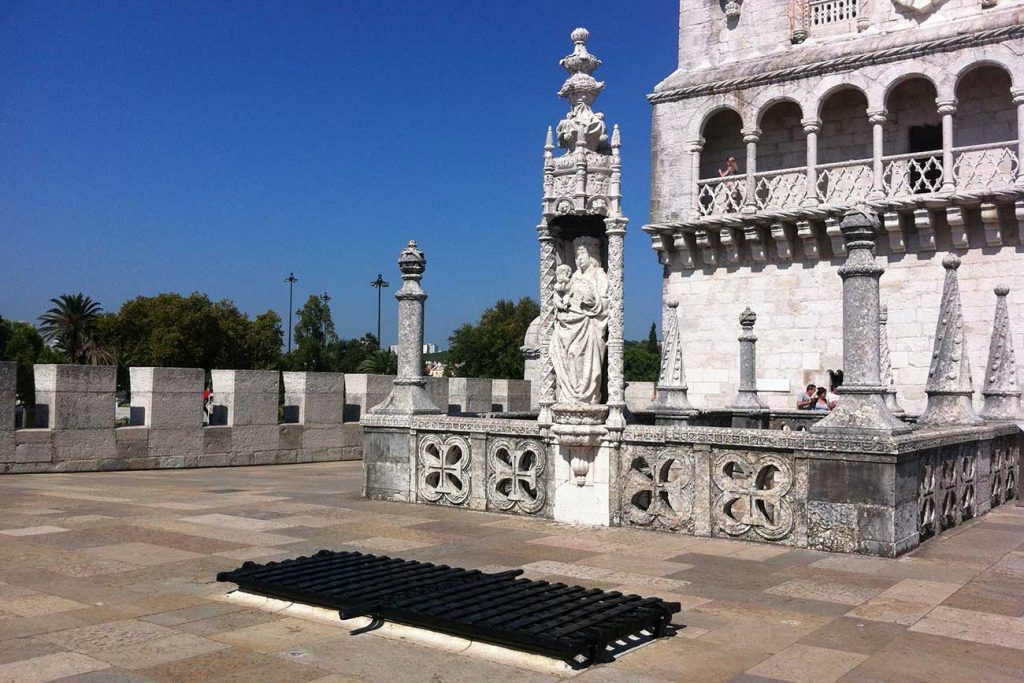 Even though many tourists choose to only see the exterior of Torre de Belem, I recommend exploring the inside as well, at least for the pretty views at the top! Or if you’re a history lover. But this is, of course, a personal choice. In order to help you out, I’ll list what you can see on both the exterior and the interior of Belem Tower down below:

NOTE: The only way to access the floors is by using the narrow spiral staircase. If you have limited mobility or you feel claustrophobic, I would not really recommend visiting inside the tower. The stairway can get quite crowded too.

Where to stay near Belém Tower, Lisbon 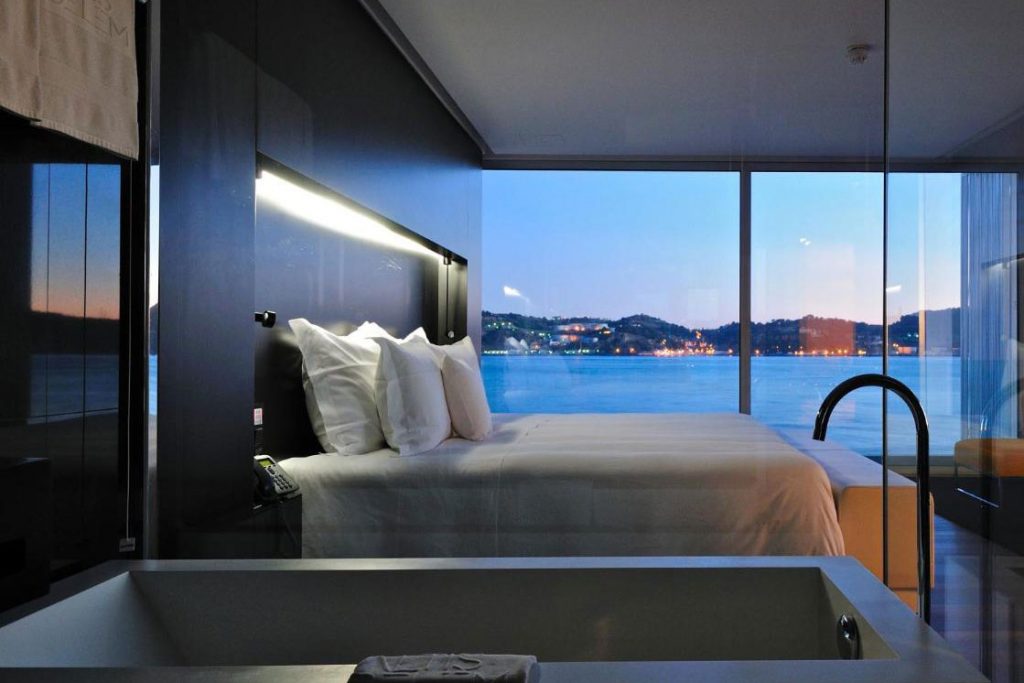 RELATED READ: In case you want to read more about the unique neighbourhood of Belem and Lisbon’s other top districts, I recommend checking out my dedicated article Where To Stay in Lisbon, Portugal – 7 Best Areas and Gorgeous Hotels

Belém district is a great area to stay if you’re looking for a laid-back experience away from the city crowds. I also recommend it to families with children. And if you find a hotel close to the tower, that’s even better! In order to make things easier for you, I’ve selected my top pick accommodations in Belem below:

What to do near Lisbon’s Belém Tower

Because the tower is not that close to the city centre, it would make all the sense in the world to explore some other cool attractions nearby while you’re there. Here’s what you can see near Torre de Belém:

TIP: Alternatively, you can book a Belem Neighborhood Walking Tour (entrance to the monastery included) or a Private 4-Hour Tour of Belém District. 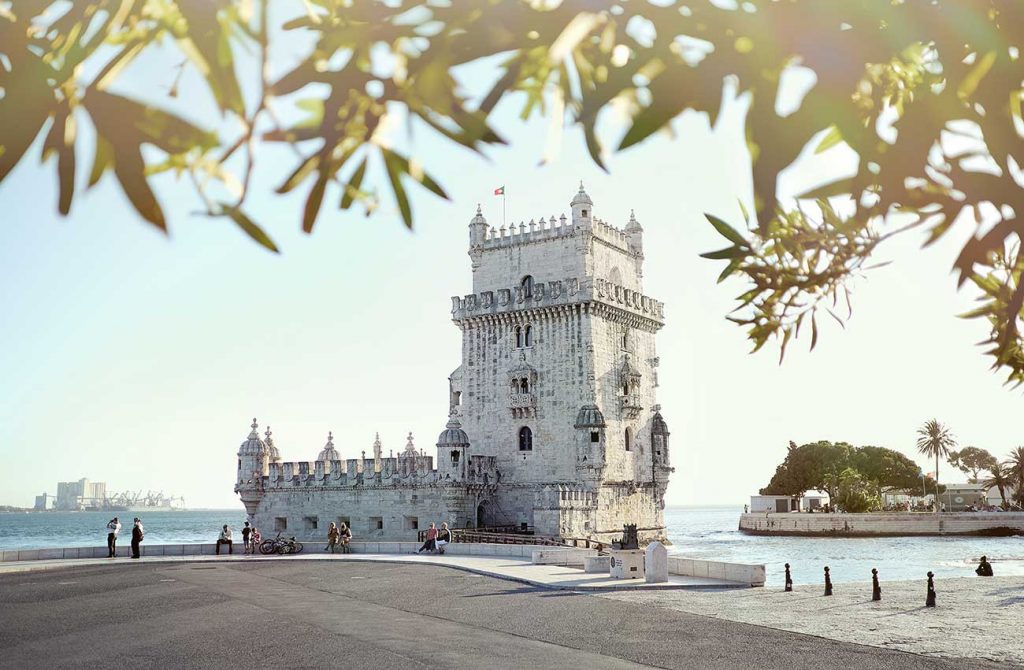 At least 30 minutes before the opening time to avoid the crowds, ideally 1 hour if you want to take some pictures of the exterior.

Remember that the last entry is 30 minutes before the closing time.

I recommend checking the official website here in order to check the updated prices and opening times. They might change, especially during these weird times!

KEEP IN MIND THE STAIRS.

The only way of accessing the different levels of the tower and the terrace is by going up and down the one-way narrow spiral staircase. There are 110 steps in total and it can get quite crowded. Not recommended for people with claustrophobia.

If you don’t have a lot of time on your hands in Lisbon, you can always just admire the exterior of the building - it’s still impressive! Don’t be sad if you don’t get to see the interior too, maybe next time! 🙂

Let’s end this ultimate guide with some fun Belem Tower facts to get you all hyped up for your upcoming trip to Lisbon!

This is my complete guide to visiting Belem Tower, one of the best tourist sites in Lisbon and the rest of Portugal! In the article above I have told you everything you need to know before your trip – opening times, entrance fees, whether you should book a guided tour, what to discover in the surrounding area, how to get to Belem Tower from Lisbon and more. You won’t need to search anywhere else!

In case you need some helpful information and advice for planning your upcoming trip to Lisbon, I recommend clicking here to find all my related articles about this beautiful city. 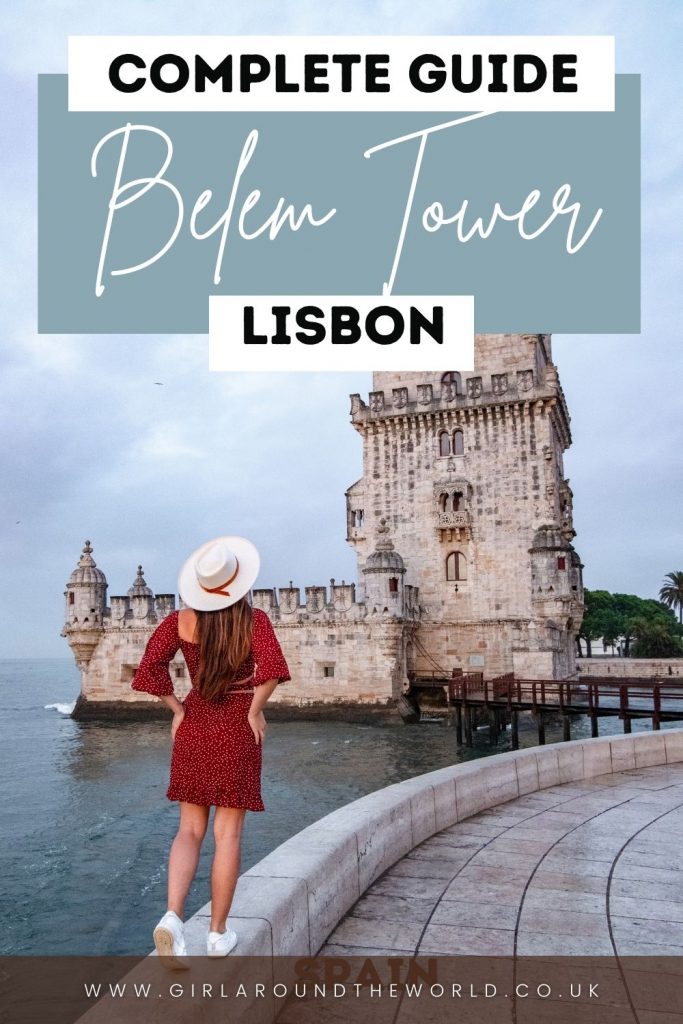 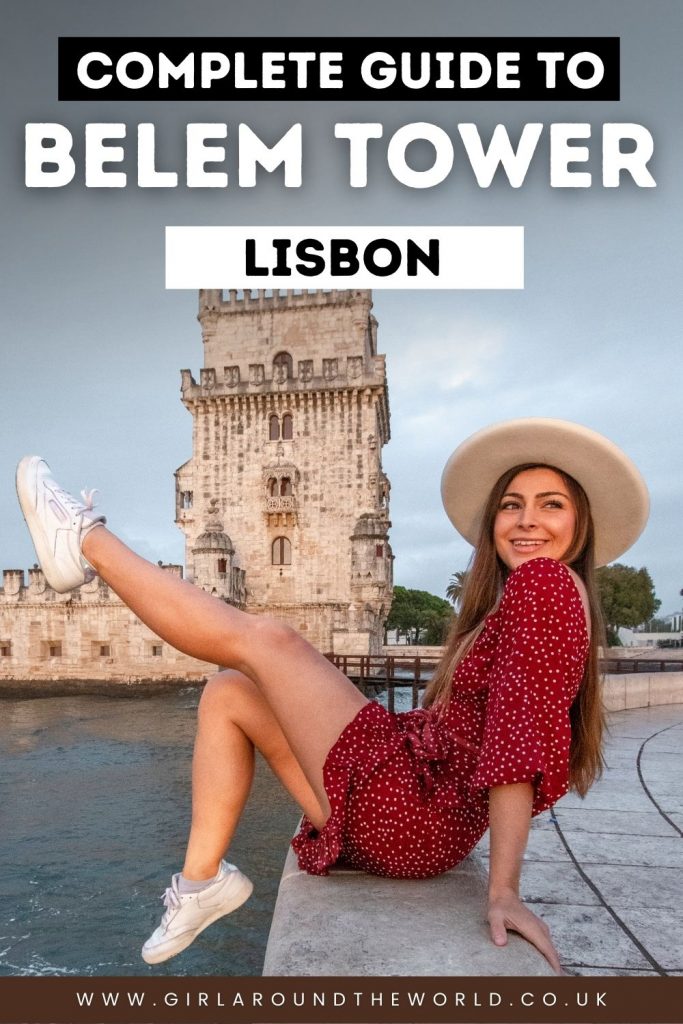